Players representing Manchester United and Chelsea have been named in the WhoScored? Premier League Team of the Week.

Players representing Manchester United and Chelsea have been named in the WhoScored? Premier League Team of the Week.

United eased to a 3-0 victory over Leicester City at the King Power Stadium on Sunday afternoon but despite their impressive display going forward, it’s actually two of their defenders that have made the TOTW.

Chris Smalling started alongside Eric Bailly at the back yesterday and the England international produced a rock solid performance to earn himself a place in the Team of the Week with a rating of 9.13.

Antonio Valencia was also in top form once again on Sunday and has joined Smalling in the back four after earning a score of 8.32 thanks largely to his assist for Zlatan Ibrahimovic’s goal just before half time.

Chelsea were also in superb form over the weekend and Eden Hazard was almost unplayable as the Blues tightened their grip at the top of the table with a 3-1 win over Arsenal at Stamford Bridge on Saturday afternoon.

The Belgian international scored the vital second goal and it was a stunner as he dribbled his way through the Gunners team before dinking Petr Cech. Hazard’s display has earned him a rating of 9.21 to secure his place in the TOTW.

Unsurprisingly, Romelu Lukaku got a perfect 10 after scoring four goals for Everton at the weekend while Jermaine Defoe also makes the cut after scoring twice during Sunderland’s win at Crystal Palace.

Here is the full TOTW: 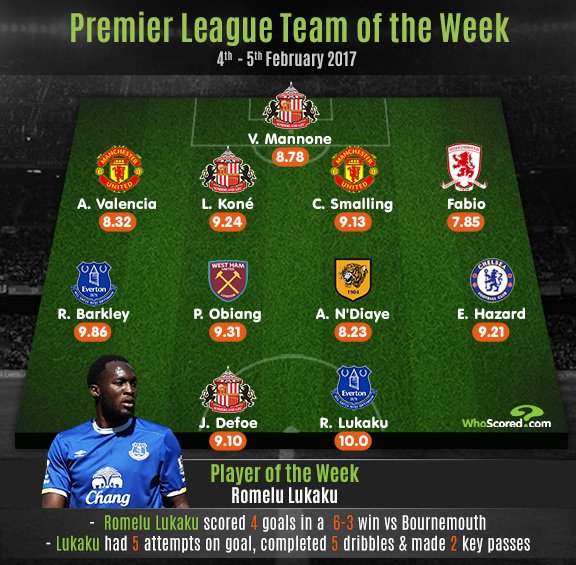