Bayer Leverkusen playmaker Hakan Calhanoglu has taken to Twitter to deny quotes attributed to him suggesting he is desperate to sign for Chelsea this summer.

The January transfer window is now closed but we can still look at deals that failed to get across the line and those being lined-up for the summer. Today, Hakan Calhanoglu responds to Chelsea speculation…. 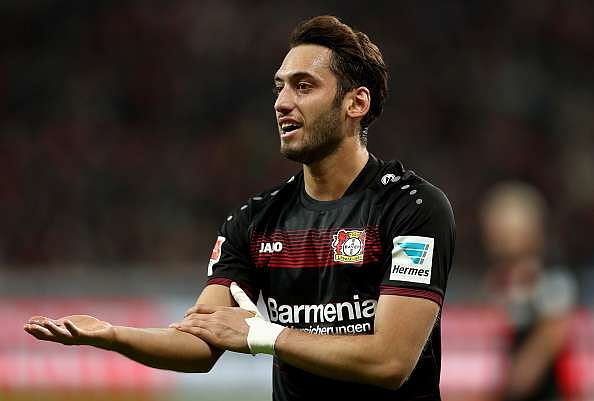 Bayer Leverkusen playmaker Hakan Calhanoglu has taken to Twitter to deny quotes attributed to him suggesting he is desperate to sign for Chelsea this summer.

Calhanoglu has endured a difficult few weeks as he was recently handed a four-month ban by FIFA following a dispute between Trabzonspor and his former club Karlsruher over breach of contract.

The young attacker had seemingly agreed to join the Turkish club only to pull out of the deal and instead sign a new contract with Karlsruher. This all happened in 2011 before he joined Hamburg in 2013 where he made his name on the European stage before moving to Leverkusen the following summer.

It looked like Calhanoglu was eyeing yet another move as the Daily Mail were one of several newspapers to cite quotes from Turkish outlet Fanatik where the attacker had supposedly said he was keen to be a Chelsea player next season.

The 22-year-old was quoted as saying:

‘God willing, I will be a Chelsea player next season,’

‘There are also a number of other clubs interested in signing me.’

The quotes came after speculation during the January transfer window linked Calhanoglu with a move to Stamford Bridge but the Turkish international has moved quickly to distance himself from these quotes.

Calhanoglu took to Twitter this afternoon to insist he didn’t mention Chelsea’s name to anyone in the press and didn’t have an interview with any Turkish journalist about his future.

I said nothing about Chelsea in the press & didn't talk to any Turkish journalist – neither about the court decision nor about my future!

We’ll have to wait and see if anything comes of all this as Calhanoglu is a player that’s been constantly linked with Chelsea so I personally wouldn’t be surprised if the Blues were to make a move for him this summer.

The youngster is a central attacking midfielder who scored 7 goals and provided a further 7 assists in his 22 appearances this season before his ban came in to effect so he’d be a very useful player for Antonio Conte to have at his disposal if he does end up joining Chelsea at the end of the season.