Manchester United take on Watford at Old Trafford on Saturday afternoon. Here is the team I think Jose Mourinho will pick for the game:

Manchester United will be looking to close in on the top four when they take on Watford at Old Trafford on Saturday afternoon.

Goalkeeper: David De Gea is almost certain to keep his place on Saturday as he’s one of the first names on Mourinho’s team sheet.

Defence: Phil Jones is expected to return after missing the win at Leicester City last week with a minor injury. Mourinho may be tempted to stick with the same defence that performed so well at the King Power but I think we’ll see Jones recalled with Chris Smalling the man to make way.

Eric Bailly has made a successful return to the starting eleven so he should continue at the back while I think we’ll see Antonio Valencia continue at right-back.

The likes of Daley Blind, Matteo Darmian and Luke Shaw are pushing for recalls but I think Mourinho will stick with Marcos Rojo at left-back as he didn’t put a foot wrong against Leicester.

Midfield: Michael Carrick could be given a recall to the midfield after missing out at Leicester but I think we’ll see the likes of Marouane Fellaini and Bastian Schweinsteiger continue on the bench.

Ander Herrera is certain to keep his place in the middle of the park while Paul Pogba should fill the box-to-box role alongside the Spanish international.

Attack: Henrikh Mkhitaryan was excellent against Leicester and he linked up superbly well with Juan Mata so we could see those two retain their places in attack.

That would mean that Marcus Rashford might be the man to make way while Anthony Martial and Wayne Rooney will miss out as Zlatan Ibrahimovic will continue to lead the line up front. 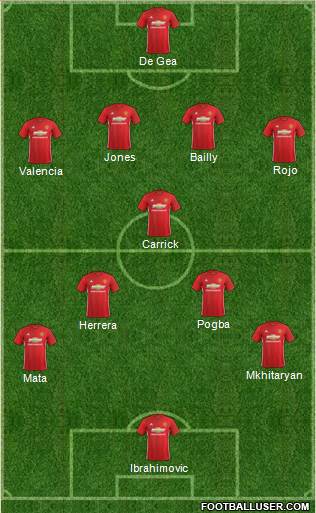