Liverpool entertain Tottenham at Anfield on Saturday evening. Here is the side I think Jurgen Klopp will select for the game:

Liverpool need to get back to winning ways following a poor run of form when they entertain Tottenham at Anfield on Saturday evening. Here is the side I think Jurgen Klopp will select for the game:

Goalkeeper: Simon Mignolet came under fresh criticism for his performance during the defeat to Hull last week but I still think we’ll see the Belgian retain his place ahead of Loris Karius this weekend.

Defence: Dejan Lovren missed the defeat to Hull with a minor knee injury but the Croatian international is expected to return alongside Joel Matip against Tottenham.

Lovren’s return will be a big boost for the Reds and we should see Lucas Leiva drop out but that’s likely to be the only change to the back four with Nathaniel Clyne and James Milner retaining their places in the full-back positions.

Midfield: Jordan Henderson will be looking to get back to his best following a disappointing performance at the KCOM Stadium last weekend but we could see Gini Wijnaldum come in for Emre Can.

Adam Lallana has missed training this week due to a tight muscle but the midfielder is expected to be passed fit and should therefore keep his place in midfield this weekend.

Attack: Liverpool will be looking to their front three to rediscover their form after a sticky patch of late. Sadio Mane has failed to hit the ground running following his return from the African Cup of Nations but I still expect to see the Senegal international keep his place on the right wing.

Philippe Coutinho has also suffered a dip in form since recovering from his ankle injury so Klopp will be hoping another full weeks training might help the Brazilian get back up to speed.

Daniel Sturridge and Divock Origi are pushing for recalls and while Klopp might be tempted to mix things up, I think he’ll stick with Roberto Firmino through the middle this weekend. 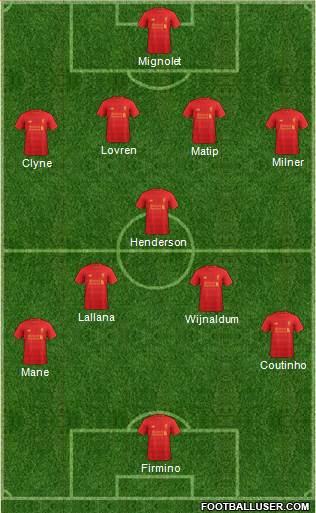 Liverpool are the narrow favourites to win the game but its always difficult to predict results in the Premier League and that’s where Odinbet comes in….

Odinbet is FREE to use, and statistical analysis for games played in world football’s top 12 leagues. Use the filter system to refine which games you should bet on and view the analysis that mathematical system produces to give you the best chance of making money from the Liverpool vs Spurs game.