Sanchez took his tally to 17 Premier League goals this season with a double during Arsenal’s 2-0 win over Hull City on Saturday and he’s not only been named in the TOTW, but the Chilean has also done enough to be named the Player of the Week thanks to a score of 9.20.

Mane was back to his scintillating best as he scored two quick-fire goals to secure Liverpool a crucial win over Tottenham Hotspur at Anfield on Saturday night and the Senegal international has also done enough to make the TOTW with a score of 8.50.

However, United dominate this weeks team as three of Jose Mourinho’s players have made the cut following their impressive 2-0 win over Watford at the weekend.

Paul Pogba and Ander Herrera controlled the midfield and they both make the cut thanks to scores of 8.42 and 8.20 but Anthony Martial was the star of the show at Old Trafford.

The French international has endured a difficult few weeks after being axed by Mourinho but he was recalled on Saturday and proved his worth after scoring one and creating the other against the Hornets.

Check out the full Team of the Week here: 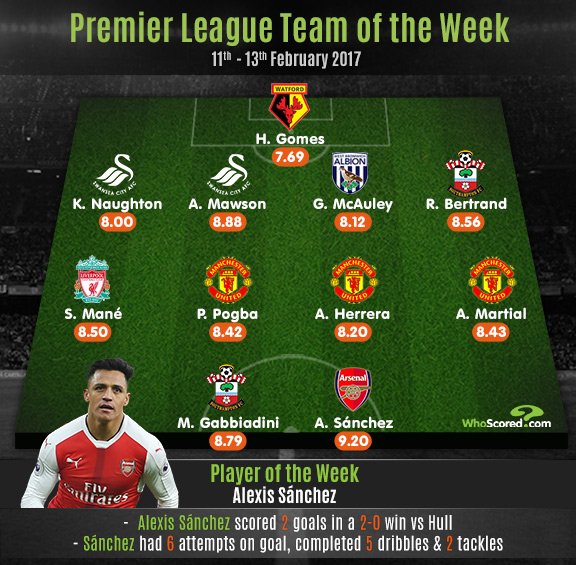