Arsenal take on Sutton in the fifth round of the FA Cup on Monday night. Here is the side Gooner Mac thinks Arsene Wenger will select for the game:

Arsenal will be desperate to bounce back from the Bayern Munich humiliation when we take on Sutton in the fifth round of the FA Cup on Monday night.

Goalkeeper: David Ospina has been out cup goalkeeper so far this season so I expect we’ll see him continue between the sticks with Emi Martinez replacing Petr Cech on the bench. Ospina will be hoping for a far quieter night’s work than he had at the Allianz Arena!

Defence: I expect we’ll see plenty of changes to the defence with Shkodran Mustafi perhaps the only player to keep his place in the back four as Wenger won’t want to take too many risks of an upset.

Nacho Monreal should come back in for Kieran Gibbs while Rob Holding could get the nod as Laurent Koscielny has been ruled out with a hamstring injury – although Per Mertesacker could be in Wenger’s thoughts.

Hector Bellerin is almost certain to be given a breather and I’ve seen reports suggesting that Mathieu Debuchy could get a rare opportunity, however, I think we’ll see Gabriel start at right-back.

Midfield: Mohamed Elneny is expected to get a recall in midfield and while Wenger might be tempted to give youngster Ainsley Maitland-Niles a run-out, I think we might see him go with a more experienced name to start with.

Francis Coquelin was woeful against Bayern so Granit Xhaka could keep his place having only just returned from a four-match ban. Aaron Ramsey and Santi Cazorla remain unavailable due to injury.

Attack: Theo Walcott could be in-line for a recall after being among the subs in midweek with Alex Oxlade-Chamberlain making way having started the previous three games in all competitions.

Mesut Ozil is almost certain to get a rest so youngster Jeff Reine-Adelaide should be given another chance to impress having started in the previous two rounds.

Danny Welbeck featured for the under-23’s today and won’t be risked on Sutton’s artificial pitch tomorrow while Lucas Perez is still a doubt with a knock so Alex Iwobi could start on the left.

I’d be shocked to see Alexis Sanchez start on a 3G pitch so Olivier Giroud could lead the line up front but don’t be surprised to see Alexis on the bench as he took part in full training today. 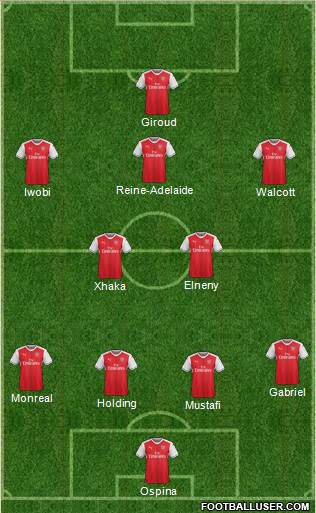 Arsenal are the heavy favourites to progress but its always difficult to predict games in the FA Cup and that’s where Odinbet comes in….

Odinbet is FREE to use, and statistical analysis for games played in world football’s top 12 leagues. Use the filter system to refine which games you should bet on and view the analysis that mathematical system produces to give you the best chance of making money from the Sutton vs Arsenal game.