Liverpool take on Leicester City at the King Power on Monday evening. Here is the side I think Jurgen Klopp will select for the game:

Liverpool will be looking to climb back in to the top four of the Premier League table when they take on Leicester City at the King Power on Monday evening.

Goalkeeper: Simon Mignolet put in a solid performance during the win over Tottenham Hotspur last time out so I don’t see any reason why Klopp would change his keeper tomorrow. Therefore, Loris Karius is likely to remain on the bench.

Defence: Dejan Lovren will face a late fitness test to see if he’s available after returning to training on Friday having missed Liverpool’s last two matches with a knee injury.

Lucas Leiva is on stand-by to deputise alongside Joel Matip in the middle of the defence but I think Lovren will be passed fit to start while Nathaniel Clyne and James Milner should retain their places in the full-back positions.

Midfield: The players should be well rested as it’s been over two weeks since Liverpool last played a competitive game so I don’t think we’ll see Klopp making too many changes from the side that beat Spurs.

Jordan Henderson and Adam Lallana are certain to start in midfield while we should see Gini Wijnaldum keep his place as he’s expected to shake off a minor calf problem. Emre Can will come in if the Dutch international is ruled out.

Attack: Daniel Sturridge is a slight doubt after being stuck down by a bout of illness over the past week but the striker was back in training on Friday so could make the squad.

However, I think he’ll have to make do with a place on the bench as Roberto Frimino should start up front with Sadio Mane and Philippe Coutinho supporting him in attack. 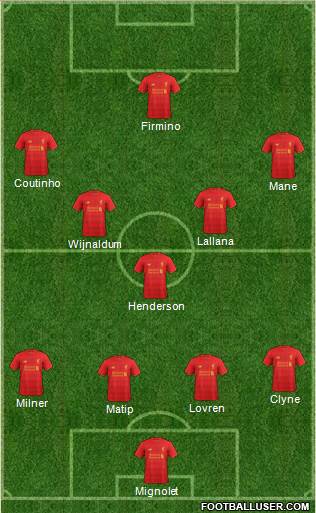 Liverpool are the favourites to take home the three points, however, its always difficult to predict games in the Premier League and that’s where Odinbet comes in….

Odinbet is FREE to use, and statistical analysis for games played in world football’s top 12 leagues. Use the filter system to refine which games you should bet on and view the analysis that mathematical system produces to give you the best chance of making money from the Leicester vs Liverpool game.