Arsenal take on Liverpool at Anfield on Saturday evening. Here is the side Gooner Mac thinks Arsene Wenger will select for the game:

Arsenal will look to cement their position in the top four of the Premier League table when they take on Liverpool at Anfield on Saturday evening.

Goalkeeper: Petr Cech should be well rested as he hasn’t started since we beat Hull City on February 11th but he’s set for a recall tomorrow with David Ospina dropping to the bench having played in our last two cup games.

Defence: Arsenal have been handed a major injury boost with the news that Laurent Koscielny is back in contention after returning to full training following a minor hamstring injury which he sustained against Bayern Munich.

The French international should line-up alongside Shkodran Mustafi in the middle of defence with Rob Holding dropping out following his run-out against Sutton.

Nacho Monreal could get the nod over Kieran Gibbs at left-back while I expect we’ll see Hector Bellerin recalled to replace Gabriel at right-back after being rested last time out.

Midfield: Mohamed Elneny has been ruled out for three weeks with an ankle injury but Aaron Ramsey will return to the squad after recovering from a calf problem.

However, after a month out I think a place on the bench is the best Ramsey can hope for and I think we’ll see Francis Coquelin come in to partner Granit Xhaka in midfield.

I’m not the Frenchman’s biggest fan, particularly alongside Xhaka, but Wenger seems to have a soft spot for him so I expect Coquelin to start this weekend despite Alex Oxlade-Chamberlain impressing in the middle of the part lately.

Attack: Alexis Sanchez is certain to get a recall and he’s likely to start up front if Wenger resists the temptation to throw Danny Welbeck straight back in to the fold.

The England forward wasn’t risked on Sutton’s artificial pitch last month but he built up his fitness with a couple of run outs with the U23’s so he’s back in contention this weekend.

Olivier Giroud will also be in the squad but I think we’ll see him join Welbeck on the bench while Lucas Perez may have to make do with a place among the subs despite a MOTM performance against Sutton.

I’d love to see Wenger give the Spaniard a chance but he seems reluctant for whatever reason so we could see Alex Iwobi keep his place on the left despite some poor form of late.

Theo Walcott got on the score-sheet in the FA Cup win and I expect we’ll see him retain his place on Saturday while Mesut Ozil is expected to recover from a bout of flu to take his place in attack. 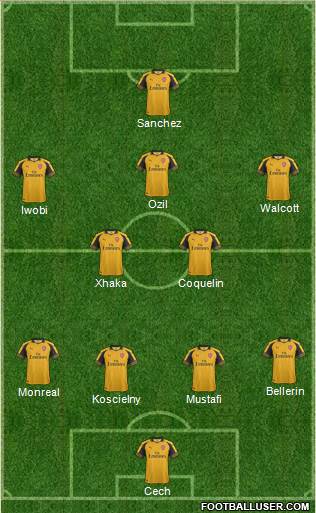