Key Trio To Miss Out? Predicted Tottenham Line-Up vs Everton

Tottenham take on Everton at White Hart Lane on Sunday afternoon. Here is the side we think Mauricio Pochettino will select for the game:

Tottenham will be looking to cement their position in the top four of the Premier League table when they take on Everton at White Hart Lane on Sunday afternoon.

Goalkeeper: Hugo Lloris is one of the first names on Pochettino’s team sheet so the Frenchman will once again lead Spurs out this weekend, unless he picks up an unexpected late injury.

Defence: Pochettino could stick with a back three this weekend as he has done against many of the top sides this season so Eric Dier is expected to keep his place at the back.

Jan Vertonghen will face a late fitness test after aggravating an ankle injury against Stoke last weekend while Toby Alderweireld is also a doubt after being forced off with a groin problem in that game.

Neither injury is thought to be serious and the defensive duo trained today so I expect they’ll be passed fit to start at the back on Sunday.

Midfield: Danny Rose has once again been ruled out as although the left-back is progressing well in his recovery from a knee injury that he suffered a month ago, Pochettino says he’s still several weeks away from full fitness.

Therefore, Ben Davies will continue in the left wing-back role while Kyle Walker should keep his place ahead of Kieran Trippier on the right.

I don’t think we’ll see Poch make any changes in the middle so Mousa Dembele should once again start alongside Victor Wanyama this weekend.

Attack: Harry Kane is  facing a late fitness test after picking up a knock during the win over Stoke last weekend but Pochettino will do all he can to get his top scorer on the pitch on Sunday.

Hueng-min Son is on stand-by to fill in up front should the England international be ruled out but I expect Dele Alli and Christian Eriksen will keep their places in attack.

Vincent Janssen will once again have to make do with a place among the substitutes as he continues to struggle to make an impression in north London.

So I think in the end as long as Vertonghen, Alderweireld and Kane all come through their fitness tests we’ll see the game eleven that started against Stoke: 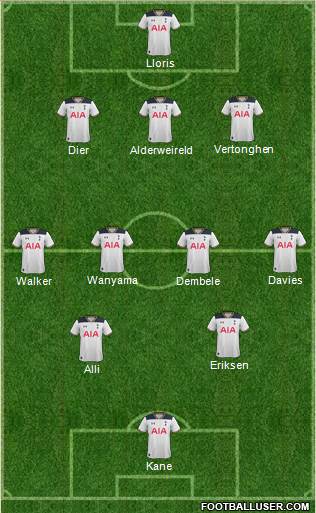 Tottenham are favourites to win this game, however, its always difficult to predict games in the Premier League and that’s where Odinbet comes in….

Odinbet is FREE to use, and statistical analysis for games played in world football’s top 12 leagues. Use the filter system to refine which games you should bet on and view the analysis that mathematical system produces to give you the best chance of making money from the Tottenham vs Everton game.