Chelsea take on West Ham at the London Stadium on Monday evening. Here is the team we think Antonio Conte will pick for the game:

Chelsea will be looking to cement their position at the top of the Premier League table when they take on West Ham at the London Stadium on Monday evening.

Goalkeeper: Thibaut Courtois is one of the first names on the team sheet so the Belgian international is almost certain to keep his place in goal tomorrow night.

Defence: Conte has suffered no fresh injury concerns at the back so I don’t see him making any changes to his preferred back three.

David Luiz has been nursing a niggling knee injury for several weeks but it’s not hampering his ability to play so the Brazilian international should once again line-up alongside Cesar Azpilicueta and Gary Cahill in defence.

Club captain John Terry and Kurt Zouma will have to make do with places on the bench.

Midfield: Conte decided to start Cesc Fabregas last weekend and he put in a goal-scoring performance during the 3-1 win over Swansea City at Stamford Bridge.

However, I expect Conte to recall Nemanja Matic for this tricky away game to provide more protection in front of the defence with the Serbian international starting alongside N’Golo Kante in the middle of the park.

Marcos Alonso should once again start on the left wing while Victor Moses will be looking to celebrate signing his new contract with another impressive display on the right.

Attack: Eden Hazard is a slight doubt after picking up a knock in training last week but I’m sure Conte will give him every chance to prove his fitness and wouldn’t be surprised to see the Belgian start tomorrow.

Pedro was on the scoresheet again last weekend so he’s expected to keep his place ahead of Willian in attack with Diego Costa leading the line through the middle. 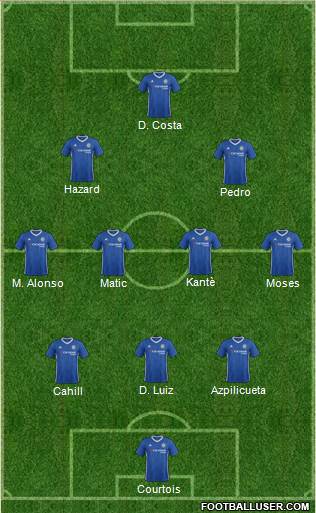