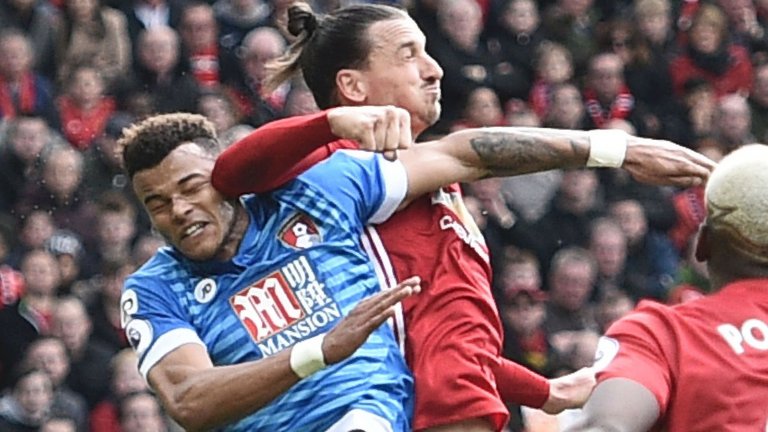 Ibrahimovic was charged after elbowing defender Tyrone Mings during the closing stages of the first half during United’s 1-1 draw with Bournemouth at Old Trafford on Saturday.

The elbow happened shortly after Mings stamped on Ibrahimovic’s head and neither incident was seen by the match officials at the time but they were caught on video so the two players were slapped with misconduct charges on Monday.

The FA have now confirmed that Ibrahimovic has accepted his charge and will therefore serve an automatic three-game suspension starting with immediate effect.

A statement on theFC.com read:

“Zlatan Ibrahimovic will serve a three-match suspension with immediate effect after he admitted an FA charge of violent conduct and accepted the standard penalty.

“It follows an incident in or around the 44th minute of the game between Manchester United and AFC Bournemouth on Saturday (4 March 2017).

“The misconduct was not seen by the match officials at the time but caught on video.”

Losing Zlatan will be a major blow to United as he’s their top scorer this season with 26 goals and no doubt Mourinho would have loved to have had him available for his return to west London next week.

Ibrahimovic has only missed one league game all season – the 1-1 draw with Arsenal back in November – and he’ll be sorely missed in the two league games against Boro and WBA as the battle for the top four couldn’t be tighter.

The 35-year-old striker is still eligible to play in United’s Europa League last-16 clash with FC Rostov on Thursday night and is due to return from his domestic ban for the game with Everton at Old Trafford on April 4.

Mings was also charged with violent conduct but Bournemouth have suggested they will appeal the decision, despite footage indicating the defender knew what he was doing and the FA have already hinted at giving him a longer suspension.