Man Utd take on FC Rostov in the first leg of their Europa League last-16 tie tomorrow evening. Here is the team I think Jose Mourinho will pick for the game:

Man Utd will be looking to come away with a positive result when they take on FC Rostov in the first leg of their Europa League last-16 tie tomorrow evening.

Goalkeeper: The Red Devils boss might be tempted to rest David De Gea ahead of Monday’s FA Cup quarter final with Chelsea but I suspect he’ll risk his No.1 with Sergio Romero among the substitutes.

Defence: Mourinho has suggested that he may protect some of his players from playing on the dodgy Rostov pitch so I wouldn’t be surprised to see the likes of Phil Jones and Eric Bailly left out after only recently returning from injury. Therefore we could see Marcos Rojo starting alongside Chris Smalling in the middle of defence.

Luke Shaw didn’t travel to Russia so Daley Blind could start at left-back while Antonio Valencia might be rested with Ashley Young given a run-out at right-back.

Midfield: Michael Carrick is another player who might be rested. The experienced midfielder started against Bournemouth on Saturday and should be called upon to face Chelsea on Monday so three games in a week might be too much for him.

Marouane Fellaini could therefore come in to partner Ander Herrera in midfield while Paul Pogba should move in to a more advanced role with Wayne Rooney not included in the squad.

Attack: Mourinho has confirmed that Zlatan Ibrahimovic will start as he’s about to begin a three-match domestic ban but the Portuguese coach hinted he won’t risk Henrikh Mkhitaryan from the start on such a poor pitch.

Marcus Rashford could come in for Anthony Martial in attack while Juan Mata might get a breather ahead of his return to Stamford Bridge with Jesse Lingard coming in on the right wing after being on the bench against Bournemouth. 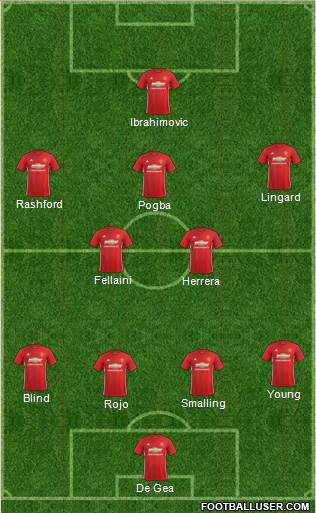