Arsenal welcome Lincoln City to the Emirates in the quarter finals of the FA Cup on Saturday. Here is the side we think Arsene Wenger will select for the game:

Arsenal will be looking to put another turbulent week behind them when we welcome Lincoln City to the Emirates in the quarter finals of the FA Cup on Saturday.

Goalkeeper: David Ospina has been selected as our keeper in the previous rounds of the FA Cup so I don’t see any reason why Wenger will change things this weekend.

Defence: I expect the boss to make plenty of changes at the back following our humiliation against Bayern Munich on Tuesday. That game will have taken a lot out of the players both physically and mentally so Wenger is likely to give them some time to recover.

Gabriel could therefore come in for Hector Bellerin at right-back while Rob Holding should be given another chance to impress in the middle of defence having played in all the previous rounds.

Per Mertesacker could even make his first start of the campaign after regaining full fitness following a serious knee injury and Kieran Gibbs should come in for Nacho Monreal at left-back.

Midfield: Wenger finally dropped Francis Coquelin against Bayern Munich but I think we’ll see the Frenchman recalled to the starting eleven on Saturday with Granit Xhaka given a breather.

Aaron Ramsey is also unlikely to start again after making his first start for over a month in midweek so Alex Oxlade-Chamberlain could be retained with Mohamed Elneny and Santi Cazorla out injured. The Ox was probably our best player against Bayern so hopefully we see him continue his recent fine form this weekend.

Attack: I think we’ll see Alexis Sanchez drop out as the Chilean looked out of sorts against Munich and I think the speculation in the media about his future is getting to him.

Wenger says Mesut Ozil is still not 100% recovered from his illness so I doubt we’ll see him start against Lincoln but Lucas Perez should hopefully be given another chance to impress in attack.

Alex Iwobi and Danny Welbeck are doubts after missing the Bayern game through illness. I hope they recover in time to start but if they are once again ruled out then we could see Jeff Reine-Adelaide and Olivier Giroud start.

Theo Walcott could keep his place on the right wing and he’ll be looking to build on what was an excellent first half against Munich that saw him score a superb goal. 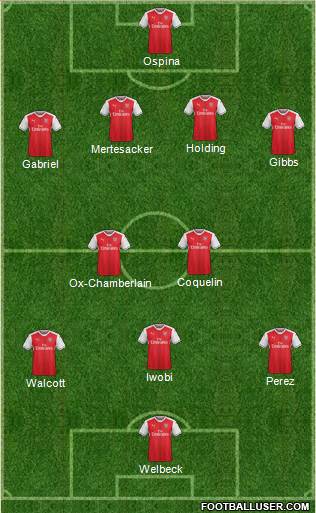