Manchester United take on Chelsea in the quarter finals of the FA Cup at Stamford Bridge on Monday. Here is the team I think Mourinho will pick for the game:

Manchester United will look to book their place at Wembley when they take on Chelsea in the quarter finals of the FA Cup at Stamford Bridge on Monday evening.

Goalkeeper: David De Gea was rested for last week’s Europa League draw at FC Rostov but the Spaniard is almost certain to get a recall tomorrow with Sergio Romero dropping out.

Defence: Luke Shaw has travelled with the squad to London so the England international could come in to the defence having been left out of the squad for the trip to Russia last Thursday.

Eric Bailly is also set for a recall after serving a European suspension last time out so he could line-up alongside Chris Smalling while Antonio Valencia should come in at right-back after being rested last week.

Midfield: Michael Carrick is another player who should be recalled after being named on the bench against Rostov and the experienced midfielder could start in the holding role with Ander Herrera playing alongside Paul Pogba just in front.

Marouane Fellaini did his job against Rostov but the Belgian international could make way against Chelsea tomorrow night.

Attack: Zlatan Ibrahimovic will start his three-game domestic suspension following his violent conduct charge for an incident with Tyrone Mings last weekend so Marcus Rashford is expected to lead the line up front.

Henrikh Mkhitaryan came through 60 minutes against Rostov on Thursday night after recovering from injury so he might not be risked from the start again so soon.

Juan Mata could therefore come in against his former side while Jesse Lingard could start on the left as rumour has it Anthony Martial and Wayne Rooney weren’t among the squad that left Manchester for London earlier today.

**UPDATE** It seems Marcus Rashford is set to miss the game due to illness while Martial and Rooney are also missing through injury so United have extremely limited options up front. 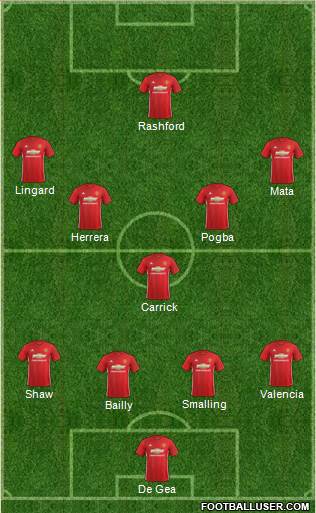