Arsenal take on West Bromwich Albion at the Hawthorns on Saturday lunchtime. Here is the side Gooner Mac thinks Arsene Wenger will select for the game:

Arsenal will look to close the gap on the top four when we take on West Bromwich Albion at the Hawthorns on Saturday lunchtime.

Goalkeeper: David Ospina was forced to miss the FA Cup win over Lincoln City with a minor knock and while he’s back in contention after returning to training this week, I still think we’ll see Petr Cech start between the sticks as he’s our first choice keeper in the Premier League.

Defence: Kieran Gibbs is a doubt for the game after picking up a knock during the win over Lincoln so we should see Nacho Monreal coming back in to the side at left-back.

Otherwise, I think we’ll see the same back four that’s started for much of the season with Hector Bellerin continuing at right-back and Shkodran Mustafi alongside Laurent Koscielny in the middle of defence.

Gabriel, Per Mertesacker and Rob Holding will vie for places on the bench.

Midfield: Wenger has dropped Francis Coquelin for the last two games against Bayern Munich and Lincoln but with Alex Oxlade-Chamberlain a major doubt, we could see the Frenchman back in the side.

The Ox is facing a late fitness test after picking up a hamstring injury last weekend and with Mesut Ozil expected to be recalled, we may see Wenger opt to go with Coquelin alongside Xhaka with Aaron Ramsey dropping out.

Mohamed Elneny is back in contention but I think a place on the bench is the best he can hope for this weekend.

Attack: Danny Welbeck is back in the squad after missing the last two games through illness and I think we’ll see him start up front with Olivier Giroud dropping out.

Alexis Sanchez was looking sharp against Lincoln so hopefully he’s ready to put doubts over his future to one side and he should keep his place in attack against West Brom.

Ozil hasn’t started in recent weeks due to sickness but he made a good impression off the bench last time out and I think we’ll see him back in the starting eleven this weekend while Theo Walcott should keep his place on the right wing.

We have a strong squad available this weekend with Alex Iwobi, Lucas Perez and Giroud offering good options from the bench so there is no excuse not to bring home all three points. 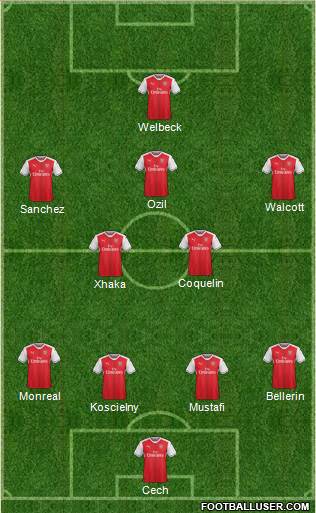 Odinbet is FREE to use, and statistical analysis for games played in world football’s top 12 leagues. Use the filter system to refine which games you should bet on and view the analysis that mathematical system produces to give you the best chance of making money from the West Brom vs Arsenal game.