Manchester United have been drawn to play Anderlecht in the quarter finals of the Europa League after the draw was conducted this afternoon.

Manchester United have been drawn to play Anderlecht in the quarter finals of the Europa League after the draw was conducted this afternoon.

United edged their way in to the last eight after beating FC Rostov 1-0 at Old Trafford last night thanks to a Juan Mata goal after drawing the first leg 1-1 in Russia last week.

Jose Mourinho’s men are the favourites to lift the trophy and they have enhanced their odds after getting a favourable draw having been pitted against Anderlecht in the quarter’s.

Anderlecht booked their place in the last eight with a 2-0 aggregate win over Apoel Nicosia having previously beaten Mechelen, so this is going to be a huge test for the Belgian giants.

The first leg will be played on April 13th, just days before United host Chelsea in the Premier League, while the second leg will take place at Old Trafford the following week ahead of their trip to Burnley.

Jose Mourinho’s side will be confident of progressing to the semi finals, with the draw for the last four scheduled to take place on April 21st.

Here is the full draw for the quarter finals: 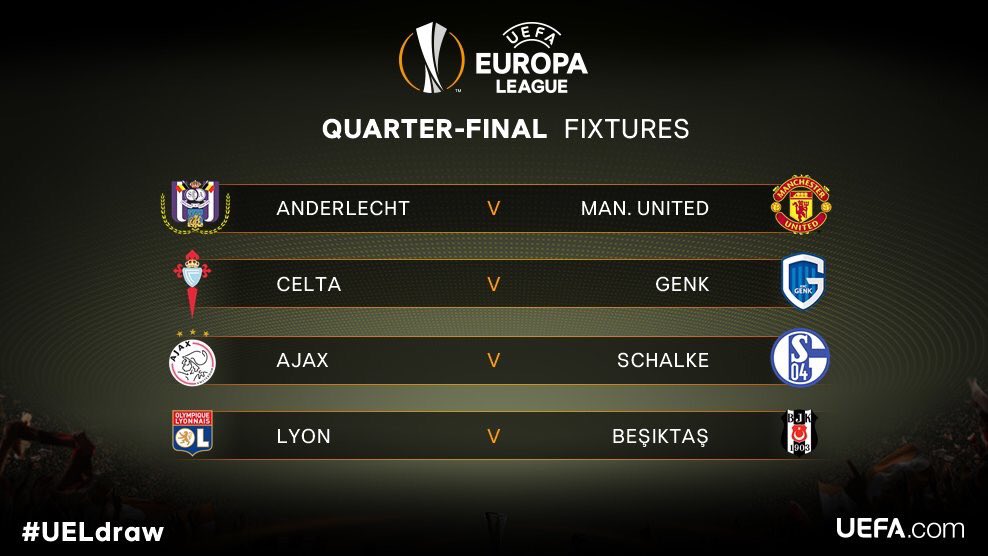