Manchester United take on Middlesbrough at the Riverside on Sunday. Here is the team I think Jose Mourinho will pick for the game:

Manchester United will be looking to continue their push for the top four when they take on Middlesbrough at the Riverside on Sunday afternoon.

Goalkeeper: The Red Devils boss started Sergio Romero for Thursday night’s Europa League win over FC Rostov and he made a crucial save at the end to secure the 1-0 win but David De Gea is still expected to be recalled on Sunday.

Defence: Mourinho has played three at the back for the past two games but I expect him to revert to a more traditional flat back four this weekend.

Daley Blind is a doubt for the game after picking up a knock last night so Marcos Rojo could be deployed at left-back with Luke Shaw still out-of-favour under Mourinho.

Antonio Valencia should continue at right-back while I think we’ll see Chris Smalling and Eric Bailly in the middle of defence – although Phil Jones is pushing for a recall.

Midfield: Mourinho has some decisions to make in midfield as Ander Herrera begins his two-game domestic ban following his dismissal against Chelsea while Paul Pogba has been ruled out after sustaining a hamstring injury against Rostov.

Michael Carrick is almost certain to get a recall in the middle of the park and it looks as though Marouane Fellaini will be the man to join him this weekend.

Attack: Zlatan Ibrahimovic serves the second of his three-game ban so Marcus Rashford is set for a recall up front with Wayne Rooney set to miss out once again after not making the squad on Thursday night due to a knee injury.

Anthony Martial is also still a doubt so Henrikh Mkhitaryan could continue on the left while Juan Mata may be deployed in a central No.10 role with Jesse Lingard coming in on the right wing. 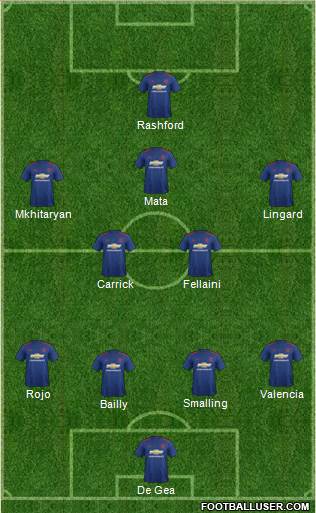