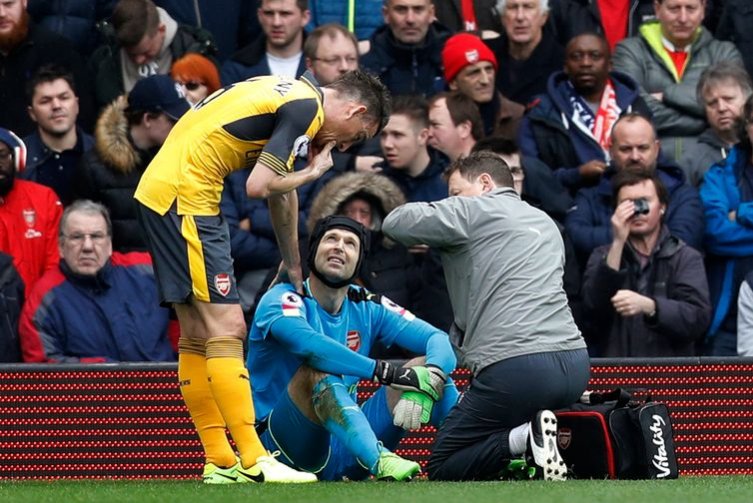 Arsenal star Petr Cech has been ruled out for around 4 weeks after scan results confirmed he suffered a calf strain against West Bromwich Albion at the weekend, according to the Mirror.

Cech pulled up holding his calf and immediately called to the bench shortly before half-time at the Hawthorns on Saturday afternoon after seemingly picking up a knock while attempting a routine pass.

The Czech international received treatment from the physio but soon limped off to be replaced by David Ospina while the score was still level at 1-1.

Arsene Wenger refused to speculate on the injury after the game and said we’d only know the full extent of the problem once scans were undertaken.

It looks like the results are in and it’s not good news as the Mirror claim that the scans confirmed Cech has suffered a sprain which will keep him out for around four weeks.

It means our No.1 will miss crucial Premier League games against Manchester City, West Ham, Crystal Palace and Middlesbrough next month which will be a real blow to our hopes of finishing in the top four.

We currently sit sixth in the table – six points off fourth-placed Liverpool – so have a real fight on our hands to qualify for the Champions League next season.

Depending on how well his recovery goes, Cech is also in danger of missing our FA Cup semi final with Man City on April 23rd so it looks like David Ospina is set for a run in the side.

The Colombian international was at fault for West Brom’s crucial second goal at the weekend so hopefully his form improves as we’re going to need him to be at his best over the coming weeks.