Arsenal entertain Manchester City at the Emirates Stadium on Sunday afternoon. Here is the side Gooner Mac thinks Arsene Wenger will select for the game:

Arsenal will look to get their season back on track when they entertain Manchester City at the Emirates Stadium on Sunday afternoon.

Goalkeeper: Petr Cech has been ruled out of the game after suffering a calf strain during the defeat at West Brom before the international break so David Ospina will deputise between the sticks on Sunday.

Defence: Despite shipping three goals at the Hawthorns, I don’t think Wenger will make any changes to his back four so we’re likely to see the same defence that started at the Hawthorns.

Hector Bellerin will therefore keep his place at right-back with Nacho Monreal keeping Kieran Gibbs out at left-back. Shkodran Mustafi will once again line-up alongside Laurent Koscielny in the middle of defence with Per Mertesacker and Gabriel having to make do with places on the bench.

Midfield: Francis Coquelin has been left out for the last three games so it looks like the penny has finally dropped for Wenger and I expect we’ll continue to see the Frenchman among the subs this weekend.

Granit Xhaka is expected to keep his place in front of the defence and while Aaron Ramsey is now back to full fitness, I hope we see Alex Oxlade-Chamberlain given the nod ahead of the Welshman.

Mohamed Elneny is in contention but I think a place on the bench is the best he can hope for this weekend.

Attack: Mesut Ozil is pushing to make his first start in over a six weeks after overcoming a minor back injury that he picked up while away with Germany during the international break.

Alexis Sanchez showed no sign of the ankle injury that forced him off against West Brom after playing 180 minutes for Chile over the past week so I expect he’ll be fit to start in attack against City.

Theo Walcott could keep his place out on the right as his pace will cause the visitors plenty of problems while Danny Welbeck could start ahead of Olivier Giroud up front.

Lucas Perez remains unavailable due to a thigh strain but Alex Iwobi will be another option among the substitutes. 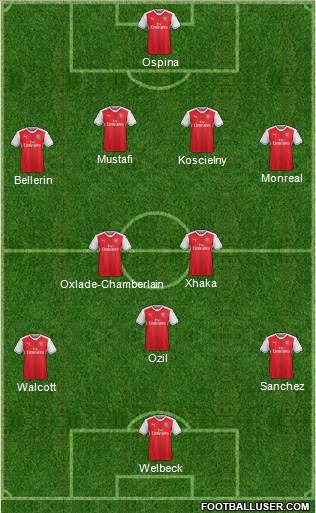