Shkodran Mustafi scored the equaliser as Arsenal fought back from behind twice to rescue a 2-2 draw with Manchester City at the Emirates this afternoon. 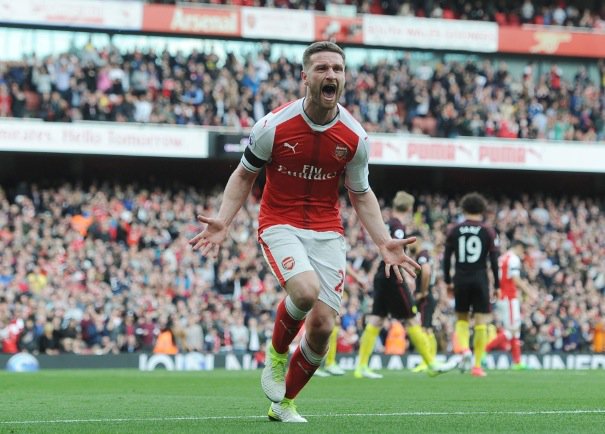 Shkodran Mustafi scored the equaliser as Arsenal fought back from behind twice to rescue a 2-2 draw with Manchester City at the Emirates Stadium this afternoon.

City started well and broke the deadlock inside the opening ten minutes as Kevin De Bruyne released Leroy Sane with a superb long range pass and the German youngster did well to out-pace Hector Bellerin, round David Ospina before slotting home for 0-1.

Arsenal grew in to the game and equalised in the 40th minute when Theo Walcott found space in the area before poking home for 1-1 but City restored their lead just minutes later when Sergio Aguero fired home from a tight angle to make it 2-1 at half time.

The Gunners responded after the break and grabbed another equaliser as Shkodran Mustafi headed home from a Mesut Ozil corner in the 53rd minute to make it 2-2.

Both sides had chances to win it during the closing stages but no further goals were scored so it ended 2-2 which leaves Arsenal sixth and seven points adrift of fourth-placed City.