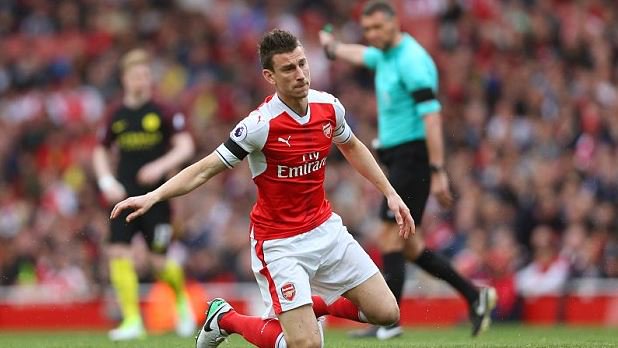 Koscielny started at the back alongside Shkodran Mustafi at the Emirates but didn’t appear for the second half after aggravating an Achilles injury during the opening forty-five minutes.

The French international was replaced by Gabriel and while Wenger has confirmed Koscielny has damaged his Achilles again, the boss says he’s not sure how serious it is or how long the defender will be out for.

Hopefully the 31-year-old isn’t sidelined for too long as it would be a huge blow to lose Koscielny at such an important part of the season with the games coming thick and fast.

Ramsey missed the match this afternoon after picking up a minor calf injury but Wenger has revealed that the Welsh midfielder could be back in contention to face West Ham on Wednesday night.

Oxlade-Chamberlain was also an absentee today due to a hamstring problem but thankfully it’s nothing serious as he too could be involved against the Hammers at the Emirates.

It’s great news that Ramsey and The Ox could be back against West Ham as our midfield was poor against City today so hopefully one of those two will be fit enough to start on Wednesday.

We desperately need to pick up all three points in midweek as today’s 2-2 draw has left us sitting sixth in the table and seven points off the top four so we need to beat our London rivals to stand any chance of qualifying for the Champions League next season.