Manchester United take on Everton at Old Trafford on Tuesday night. Here is the team I think Jose Mourinho will pick for the game:

Manchester United will be looking to continue their push for the top four when they take on Everton at Old Trafford on Tuesday night.

Goalkeeper: There is little chance that David De Gea will be dropped for this game so I fully expect the Spaniard to once again start between the sticks tomorrow.

Defence: Mourinho has injury problems in defence with Phil Jones ruled out for several weeks with a broken toe while Chris Smalling is also missing after suffered a knee injury while away on international duty.

Marcos Rojo had an easy afternoon’s work during the 0-0 draw with West Brom at the weekend but he’s expected to continue alongside Eric Bailly in the middle of defence.

Luke Shaw is set to return to the squad following talks with Mourinho but I think Daley Blind may start at left-back while Antonio Valencia should continue in his familiar right-back role.

Midfield: United have been boosted by the return of Ander Herrera as he’s available again after completing his two-game suspension so he should replace Marouane Fellaini in midfield.

Michael Carrick should keep his place while Paul Pogba could be back in contention after returning to training following a hamstring injury. The Frenchman was spotted arriving with the rest of the squad at the Lowry Hotel earlier this evening so I wouldn’t be surprised to see him start against Everton.

Attack: Zlatan Ibrahimovic will return to the side and add some much-needed fire-power up front after serving his three-match ban so Marcus Rashford is likely to drop to the bench.

With Juan Mata ruled out for several weeks following groin surgery, Henrikh Mkhitaryan is expected to keep his place in attack while Anthony Martial could get the nod ahead of Jesse Lingard.

Wayne Rooney made his return from injury with a substitute appearance at the weekend but he’s likely to be named on the bench against his former club. 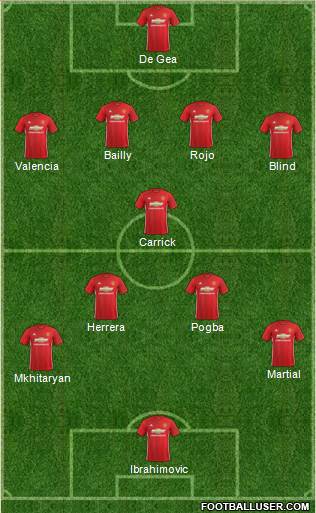