Arsenal entertain West Ham at the Emirates Stadium on Wednesday night. Here is the side we think Arsene Wenger will select for the game: Arsenal will look to close in on the top four when they entertain West Ham at the Emirates Stadium on Wednesday night.

Goalkeeper: We have something of a goalkeeper crisis to deal with as the Mirror reported earlier this evening that David Ospina is set to miss out tomorrow after suffering a back problem against Man City. With Petr Cech also ruled out with a calf strain, it looks like third-choice Emi Martinez will start in goal.

Defence: Our defence was ripped open way too often once again on Sunday and unfortunately we’ve now lost arguably our best defender with Laurent Koscielny ruled out after being forced off with an Achilles injury against City.

Gabriel did reasonably well during the second half and I expect the Brazilian will partner Shkodran Mustafi tomorrow night with Hector Bellerin and Nacho Monreal retaining their places at full-back.

Midfield: Francis Coquelin missed training today so he’s a doubt tomorrow but thankfully Alex Oxlade-Chamberlain and Aaron Ramsey are back in contention after recovering from minor knocks.

Oxlade-Chamberlain missed the City game with a hamstring problem while Ramsey had a calf strain but both players are back in full training and available tomorrow night.

The Ox had been performing well in a central role so I wouldn’t be surprised to see him given the nod alongside Granit Xhaka with Rambo among the subs.

Attack: I think we might see Wenger freshen things up in attack with Olivier Giroud coming back in up front. The boss has been cautious with Danny Welbeck given his recent injury problems so I think he’ll make way for Giroud.

Alexis Sanchez is almost certain to keep his place on the left while Mesut Ozil also made a successful return to the starting eleven at the weekend so should retain his place in the attacking midfield role.

Theo Walcott was on the score-sheet against City so he’s probably favourite to start on the right with the likes of Alex Iwobi having to make do with places on the bench. 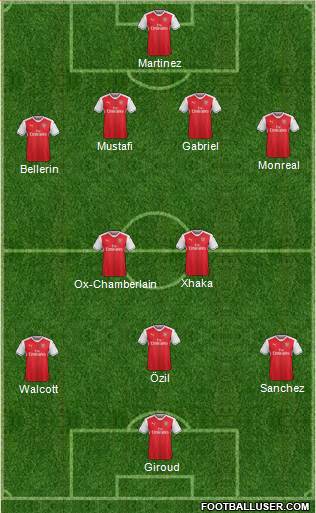