Chelsea entertain Manchester City at Stamford Bridge on Wednesday night. Here is the team we think Antonio Conte will pick for the game:

Chelsea will look to bounce back from their defeat to Crystal Palace when they entertain Manchester City at Stamford Bridge on Wednesday night.

Goalkeeper: Thibaut Courtois showed no sign of the hip injury that required treatment in the build-up to the Palace clash so the Belgian international is expected to keep his place between the sticks tomorrow.

Defence: Conte has no fresh injury concerns in defence so I don’t think we’ll see and changes made to what has become a familiar back three consisting of David Luiz, Cesar Azpilicueta and Gary Cahill.

Kurt Zouma has expressed his concerns over his lack of playing time recently but I don’t see the young Frenchman breaking in to Conte’s side tomorrow night, or any time soon for that matter.

Midfield: Victor Moses missed the 2-1 defeat to Palace over the weekend due to a toe injury and he’s facing a late fitness test to see if he’ll be able to return against City. However, the Nigerian international took part in training today so I’m expecting him to come back in to the side on the right.

Otherwise, I think we’ll see Nemanja Matic continue alongside N’Golo Kante to offer protection against a dangerous City attack while Marcos Alonso should continue on the left after shaking off a knock.

Attack: With Moses returning that will allow Pedro to move back in to a more advanced role after deputising on the right wing against Palace.

That could see Cesc Fabregas miss out as Eden Hazard is certain to keep his place as long as he doesn’t suffer any reaction to the calf problem he nursed over the international break.

Diego Costa is also expected to once again start up front after recovering from a minor ankle issue meaning the likes of Michy Batshuayi and Willian will have to make do with places on the bench. 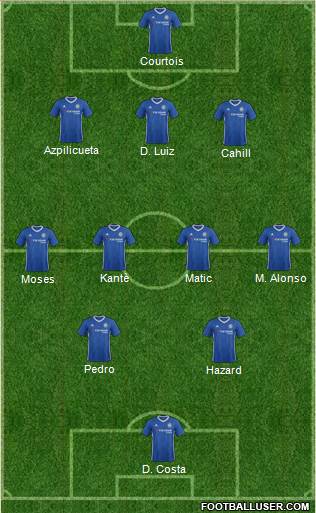