Liverpool take on Stoke City at the Britannia Stadium on Saturday. Here is the side I think Jurgen Klopp will select for the game:

Liverpool will look to bounce back from their disappointing draw with Bournemouth when they take on Stoke City at the Britannia Stadium on Saturday afternoon.

Goalkeeper: Simon Mignolet has established himself as Klopp’s number one so I don’t think we’ll see the goalkeeping position rotated again before the end of the season.

Defence: Joel Matip was only named on the bench against Bournemouth as Klopp didn’t want to risk him due to a minor back complaint but I expect the Cameroonian star to come back in to the starting eleven this weekend.

Dejan Lovren is likely to keep his place meaning Ragnar Klavan will make way after being at fault for the late Bournemouth equaliser last night. Nathaniel Clyne will continue at right-back while James Milner should once again start at left-back.

Midfield: Klopp still has issues in midfield as Jordan Henderson remains out with an on-going foot injury while Adam Lallana is out for a few weeks with a thigh injury.

Emre Can came through the Bournemouth game unscathed so he should keep his place alongside Lucas Leiva in midfield. Gini Wijnaldum was at fault for the first goal last night but the Dutchman should retain his place due to a lack of alternatives.

Attack: Philippe Coutinho is a minor doubt after being forced off against the Cherries with illness. The Brazilian international will be assessed at training tomorrow but I’m sure Klopp will give him every opportunity to prove his fitness.

Losing Coutinho would be a nightmare for Liverpool as they’re already without Sadio Mane with the Senegal star set to miss the rest of the season with a knee injury.

Divock Origi is likely to continue up front after getting himself on the score-sheet last night while Roberto Firmino is expected to keep his place in attack. Therefore, if Coutinho is fit then Daniel Sturridge may have to make do with a place on the bench. 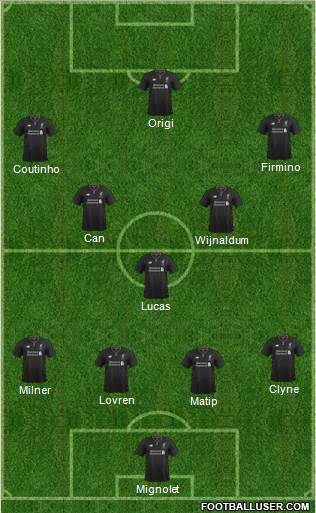 Odinbet is FREE to use, and statistical analysis for games played in world football’s top 12 leagues. Use the filter system to refine which games you should bet on and view the analysis that mathematical system produces to give you the best chance of making money from the Stoke vs Liverpool game.