Man Utd take on Anderlecht in the first leg of their Europa League quarter final on Thursday. Here is the team I think Jose Mourinho will pick for the game:

Manchester United will look to put one foot in the last four when they take on Anderlecht in the first leg of their Europa League quarter final in Belgium on Thursday night.

Goalkeeper: David De Gea hasn’t featured for the last two games due to a minor knock but while the Spanish international has travelled with the rest of the squad, Mourinho has suggested Sergio Romero will keep his place between the sticks after keeping goal in every Europa League game so far.

Defence: Antonio Valencia is back in contention after missing the last two games so the Ecuadorian international is expected to replace Matteo Darmian at right-back tomorrow.

Luke Shaw played during the 3-0 win over Sunderland on Sunday and he’ll be hoping to retain his place but I think we’ll see Daley Blind come in to the back four.

Mourinho is still without the injured Phil Jones and Chris Smalling so Marcos Rojo is expected to once again start alongside Eric Bailly in the middle of defence.

Midfield: Michael Carrick was given a breather at the weekend so he’s set for a recall in midfield with Marouane Fellaini favourite to make way. Ander Herrera is one booking away from a suspension but he’s still likely to keep his place alongside Paul Pogba in the centre of the park.

Attack: Wayne Rooney is back in training after recovering from an ankle problem that’s hampered him recently but he hasn’t travelled to Belgium as Mourinho says he’s still not fit enough to play.

Zlatan Ibrahimovic will continue to lead the line up front while Marcus Rashford may come back in to the side with Jesse Lingard making way meaning Anthony Martial may have to make do with a place on the bench. Henrikh Mkhitaryan is likely to keep his place in the attack with Juan Mata still recovering following groin surgery. 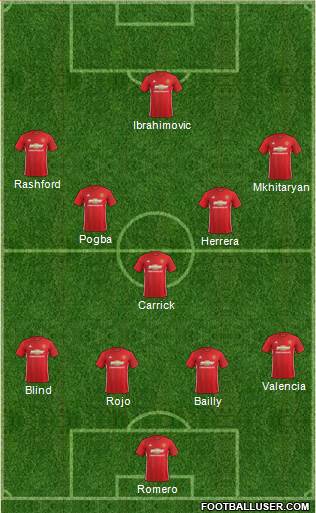