Manchester United take on Chelsea at Stamford Bridge on Sunday afternoon. Here is the team I think Jose Mourinho will pick for the game:

Manchester United will look to close in on the top four when they take on Chelsea at Stamford Bridge on Sunday afternoon.

Goalkeeper: David De Gea hasn’t featured in United’s last three games but the Spanish international is expected to get a recall between the sticks on Sunday with Sergio Romero dropping out.

Defence: Antonio Valencia made a successful comeback during last night’s 1-1 draw with Anderlecht and he should retain his place at right-back while Luke Shaw could come in at left-back in place of Matteo Darmian after being given another chance to resurrect his career in recent games.

Mourinho has confirmed that Phil Jones and Chris Smalling won’t be back in contention for another month so Marcos Rojo is set to continue alongside Eric Bailly in the middle of defence for the foreseeable future.

Midfield: Ander Herrera was an unused substitute in the Europa League clash on Thursday night after being rested so he’s almost certain to get a recall in midfield this weekend.

Michael Carrick should continue to skipper the United side in front of the back four while Paul Pogba will be looking to impress against Chelsea on Sunday.

Attack: Wayne Rooney has been training this week as he looks to make his return from an ankle injury but it remains to be seen whether he’ll be fit enough to return to the squad.

Even if the 31-year-old is declared fit, a place on the bench is the best Rooney can hope for as Zlatan Ibrahimovic is certain to lead the line up front and will be looking to celebrate his nomination for the PFA Player of the Year with another goal.

Juan Mata has been ruled out for the rest of the season following groin surgery so Henrikh Mkhitaryan is set to continue in attack while Anthony Martial may get a recall on the left with Jesse Lingard dropping out. 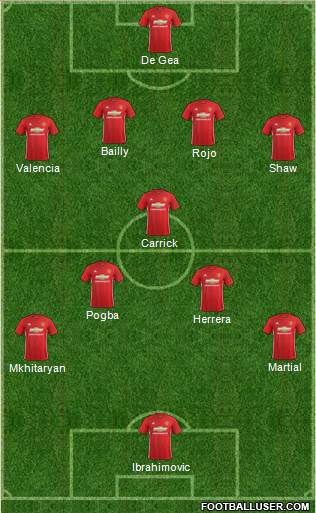