Tottenham take on Crystal Palace at Selhurst Park on Wednesday evening. Here is the side we think Mauricio Pochettino will select for the game:

Tottenham will look to bounce back from their FA Cup defeat and keep pace with Chelsea at the top of the table when they take on Crystal Palace at Selhurst Park on Wednesday evening.

Goalkeeper: Hugo Lloris will have been disappointed to concede four in the FA Cup semi-final defeat to Chelsea and he may feel he should have done better to save the Willian free-kick in particular. However, the Frenchman is certain to keep his place between the sticks tomorrow night. Michel Vorm is expected to return to training next month as he continues to recover from a knee injury.

Defence: Pochettino reverted to his preferred back three at the weekend and although Spurs lost the game they were arguably the better side over the 90 minutes so the Argentinean coach may choose to stick with his 3-4-2-1 formation tomorrow.

That means we’re likely to see Eric Dier once again playing at the back alongside Toby Alderweireld and Jan Vertonghen with Kevin Wimmer supporting from the bench.

Midfield: Victor Wanyama was back in midfield on Saturday after fully recovering from a back injury and I expect he’ll continue alongside Moussa Dembele in the middle of the park against Palace.

Pochettino surprisingly left Ben Davies on the bench in the FA Cup clash with Hueng-min Son deployed on the left but the gamble back-fired as the South Korean gave away a crucial penalty.

Danny Rose is back in full training after recovering from a serious knee injury but he’s unlikely to be involved just yet so I think we’ll see Davies return on the left with Kyle Walker recalled on the right after being left out at the weekend.

Attack: Harry Kane scored another fine goal against Chelsea so he’s certain to continue up front while Christian Eriksen and Dele Alli will once again provide support in attack.

Son will be an option from the bench while Vincent Janssen will also be among the substitutes if Spurs need more firepower against Palace in the second half. 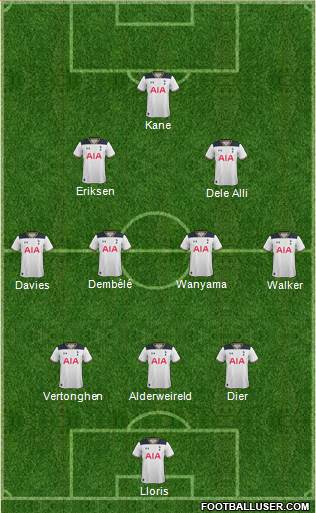