Liverpool are ready to battle-it-out with Tottenham over the signing of £25m-rated Bayern Munich attacker Douglas Costa this summer, according to reports

Managers are now making plans for the summer transfer window so we’ll bring you all the latest news and gossip from around the globe. Today, Liverpool are linked with Douglas Costa…. 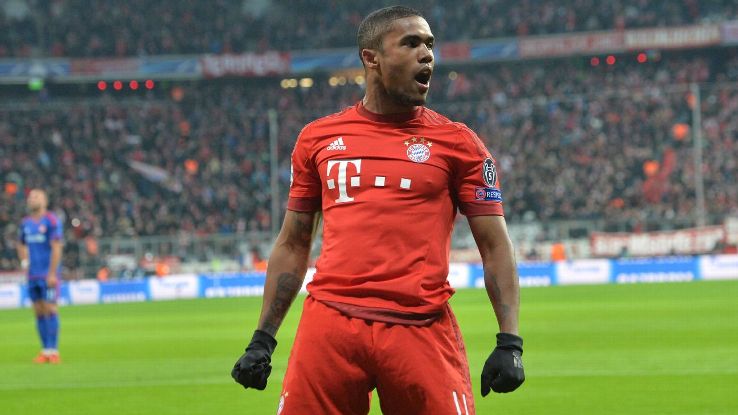 Liverpool are ready to battle-it-out with Tottenham over the signing of £25m-rated Bayern Munich attacker Douglas Costa this summer, according to a report by talkSPORT.

Costa made his name during a five-year spell at Shakhtar Donetsk and his impressive form in Ukraine earned him a £25m move to Bayern in the summer of 2015.

However, the Brazilian international’s time in Germany hasn’t gone according to plan as he’s struggled to hold down a regular place in Carlo Ancelotti’s starting eleven this season.

The 26-year-old has started just 13 Bundesliga games so far with Arjen Robben and Franck Ribery the preferred options on the wings as Bayern close-in on yet another league title.

It’s led to speculation Costa may look for a move this summer and a switch to the Premier League could be on the cards with Tottenham reportedly lining-up a move for the attacker.

Mauricio Pochettino is looking to further strengthen his squad ahead of their return to the Champions League and Costa could be viewed as a potential replacement for Erik Lamela – who’s being tipped to head back to Italy following a difficult campaign.

However, talkSPORT are citing a report from Bild that claims Tottenham will now face stiff competition from rivals Liverpool for Costa’s signature this summer.

Jurgen Klopp is also needing to add to his squad after seeing their title push fade away during the second half of the season and Costa is the quality of player Liverpool need if they’re to mount a serious challenge next year.

The German outlet suggests that Bayern will cash-in if they receive an offer of around £25m – which seems like an absolute bargain for a player of Costa’s quality in today’s market.

However, it looks like the Merseysiders may have a fight on their hands trying to lure Costa to Anfield as a close friend has claimed the attacker will reject any approach from Liverpool.

Lucas Cruel, who’s also Costa’s personal fitness coach, is quoted in the Mirror as saying there is no chance the player will join Liverpool, or presumably Tottenham, as he’s happy in Munich.

“No way! Douglas will not go to Liverpool, he prefers to stay at Bayern Munich. It’s a good life here.”

We’ll have to wait and see what happens over the coming months as things can change very quickly in football but there’s no doubt Costa would be a superb signing for Liverpool or Spurs if they were able to tempt him away from Munich this summer.