Managers are now pressing ahead with their plans for the summer transfer window so we’ll bring you all the latest news and gossip from around the globe. Today, Radja Nainggolan is linked with a move to England… 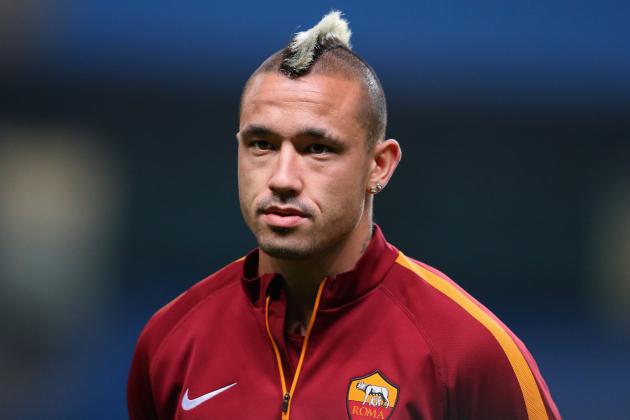 Manchester United are set to hold talks with Roma over a potential £40m deal to sign Radja Nainggolan but Chelsea could look to scupper any move, according to the Daily Mail.

Nainggolan has developed in to one of the best central midfielders in Italian football since joining Roma from Cagliari in 2014 while he’s also been capped 28 times for the Belgian national team.

His powerful displays in the middle of the park have attracted interest from the Premier League as both United and Chelsea have been linked in the past and it seems they are now set to renew their interest this summer.

Jose Mourinho is in the market for a midfielder to act as a long-term replacement for Michael Carrick and the Daily Mail claim the United boss has turned his attention to Nainggolan after being frustrated in his pursuit of Eric Dier.

Tottenham are refusing to do business for the versatile England international so the newspaper says Mourinho is now ready to step-up his interest in Nainggolan after monitoring him for over six months.

Roma are undertaking a squad overhaul this summer and the newspaper suggests they are prepared to cash-in on Nainggolan for £40m with the Serie A outfit set to hold talks with United about a potential deal.

However, the Daily Mail claim that despite being on the verge of sealing a deal to sign Tiemoue Bakayoko, Chelsea could also renew their interest in Nainggolan as Antonio Conte looks to strengthen his midfield options.

Nemanja Matic is being strongly tipped to leave Stamford Bridge following Bakayoko’s arrival and the report suggests that Conte may now turn to the Belgian international as a potential replacement.

It sets up the intriguing possibility that Chelsea and United are now on course for another transfer battle having already butted heads over Romelu Lukaku and Bakayoko this summer.

We’ll have to wait and see how things develop but Nainggolan would be an excellent signing for United or Chelsea if either could get a deal agreed for his signature this summer.