Liverpool kick off the new campaign with a trip to Vicarage Road to take on Watford on Saturday. Here is the side I think Klopp will select for the game:

Liverpool kick off the new Premier League campaign with a trip to Vicarage Road to take on Watford on Saturday lunchtime.

Goalkeeper: Simon Mignolet produced some fine form during the closing stages of last season and looks set to continue as Klopp’s No.1 this campaign so we should expect to see the Belgian keep the gloves with Loris Karius on the bench this weekend.

Defence: Nathaniel Clyne is expected to miss out with a hamstring injury so Trent Alexander-Arnold will get the chance to stake his claim for the right-back spot during the early stages of the season.

Liverpool have signed young left-back Andrew Robertson this summer but I think he’ll be bedded in slowly so James Milner should retain his place in the defence.

Klopp is still searching for a new centre-back so the back four will have a familiar look to it with Dejan Lovren alongside Joel Matip in the middle of defence.

Midfield: Jordan Henderson looks to have overcome his troublesome foot problem that plagued him last year but the skipper is suffering from illness so will be handed a late fitness test on Saturday.

Adam Lallana has been ruled out for up to three months with a thigh strain so Emre Can should should start in the midfield three despite speculation surrounding his future. Gini Wijnaldum will make up the midfield trio as Lucas Leiva has joined Lazio.

Attack: Philippe Coutinho’s future at Anfield has been the subject of debate this week amid strong interest from Barcelona and the Brazilian playmaker is a major doubt for this game due to a back injury.

Mohamed Salah is set to make his competitive debut in attack and the Egyptian international has been hugely impressive in pre-season following his move from AS Roma.

Sadio Mane should take his place in the front three after recovering from a knee injury that he sustained towards the end of last season while Roberto Firmino will lead the line up front. Daniel Sturridge is a doubt after suffering a thigh injury during pre-season. 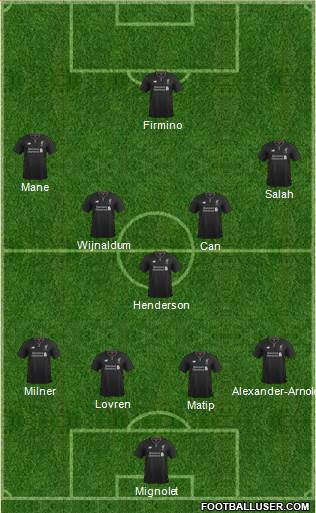