Liverpool entertain Hoffenheim at Anfield in the second leg of their play-off on Wednesday. Here is the side I think Jurgen Klopp will select for the game:

Liverpool will look to secure safe passage to the group stages of the Champions League when they entertain Hoffenheim at Anfield in the second leg of their play-off on Wednesday night.

Goalkeeper: Simon Mignolet is now Klopp’s established first choice goalkeeper so the Belgian international is certain to keep his place between the sticks tomorrow night.

Defence: Dejan Lovren was rested for the 1-0 victory over Crystal Palace at the weekend so the Croatian is expected to be recalled alongside Joel Matip with Ragnar Klavan dropping to the bench.

Nathaniel Clyne continues to recover from a hamstring injury so their is a void to fill at right-back and Trent Alexander-Arnold is likely to be recalled in place of Joe Gomez after being given a breather against Palace.

Andrew Robertson made a solid debut on Saturday but it would be a big ask to throw the youngster in for such a vital game so Klopp may be tempted to recall the more experienced Alberto Moreno – who started in the first leg.

Midfield: Adam Lallana remains on the sidelines with a thigh injury but Emre Can should get a recall in midfield after being rested at the weekend meaning James Milner will drop out.

Gini Wijnaldum should keep his place in midfield while Jordan Henderson will once again skipper the side in the holding role.

Attack: Klopp revealed at his press conference this evening that Philippe Coutinho is now ill so he wouldn’t be available even if he had recovered from his back injury. Therefore, we’ll have to wait a little while longer for him to be reintegrated back in to the squad after failing to force a move to Barcelona.

Mohamed Salah is in-line for a recall after being rested against Palace but the Egyptian international is almost certain to come back in to the attack alongside Sadio Mane.

That would see Roberto Firmino move back up front with Daniel Sturridge the man most likely to make way after making his injury return at the weekend. 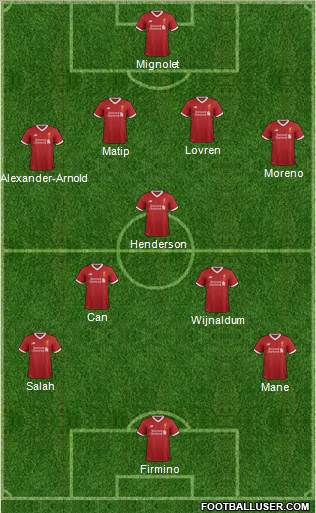