Liverpool take on Arsenal at Anfield this afternoon. Here is a preview with team news, line-ups, betting tips and predicted score

Both sides will be looking to make an early statement in the Premier League title race when Liverpool welcome Arsenal to Anfield this afternoon.

The Merseysiders have taken four points from their opening two league games as they secured a narrow 1-0 win over Crystal Palace last week after drawing 3-3 at Watford on the opening weekend.

Jurgen Klopp’s men warmed up for the visit of Arsenal by booking their place in the group stages of the Champions League with a 6-3 aggregate win over Hoffenheim so they should be full of confidence today.

Arsenal arrive at Anfield after slumping to a disappointing 1-0 defeat at Stoke City last weekend so Arsene Wenger will be desperate to get back on track and pick up a positive result this afternoon.

The Gunners lost both home and away against Liverpool last season so the north Londoners will be looking to end that run at Anfield today.

Liverpool will continue to be without Philippe Coutinho as he’s still suffering from an apparent back injury amid on-going speculation linking him with a big-money move to Barcelona.

Media reports this morning claim that Simon Mignolet is set to be dropped by Klopp so Loris Karius is expected to make his first start of the season.

Emre Can and Trent Alexander-Arnold will be available after sustaining minor issues against Hoffenheim but Adam Lallana and Nathaniel Clyne remain sidelined.

Arsenal welcome Alexis Sanchez back in to the squad after the Chilean international recovered from an abdominal injury that kept him out of the opening two league games.

Laurent Koscielny is also available again after serving a three-match suspension but Santi Cazorla remains out with a long-term Achilles injury.

Alex Oxlade-Chamberlain may be left out of the starting eleven amid on-going speculation linking him with a move to Chelsea or Liverpool this month. 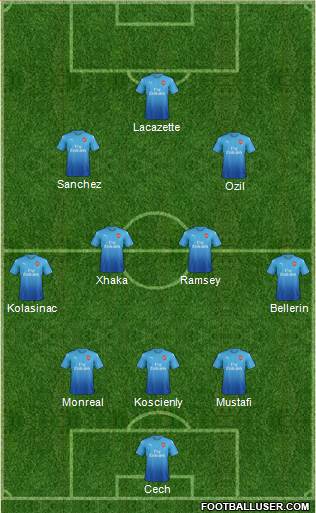 Liverpool 3-1 Arsenal: The Reds had an excellent record against the top six last season after going unbeaten in those ten matches while Arsenal had the worst record against their direct rivals so Klopp will be confident this afternoon. The Gunners have also lost 8 of their last 13 games on the road and their defence has looked vulnerable so far this season so I can see Liverpool securing the win.

Liverpool are the 11/10 favourites with the bookmakers but we can get new customers enhanced odds of 30/1 on the Reds – just click here to take advantage of these crazy odds. If you fancy Arsenal, then we can get you 50/1 – again, just click here to snap-up this exciting offer [winning paid in free bets, max stake £1, T&C’s apply]

However, we think Liverpool will win and here are some other bets I like the look of: