Manchester City entertain Liverpool at the Etihad Stadium on Saturday lunchtime. Here is the side I think Pep Guardiola will select for the game: Manchester City will look to maintain their unbeaten start to the new season when they entertain Liverpool at the Etihad Stadium on Saturday lunchtime.

Goalkeeper: Summer signing Ederson will get his first taste of playing against one of the Premier League’s big-boys so he’ll be out to impress against the Merseysiders this weekend.

Defence: City skipper Vincent Kompany is a doubt with a knock so John Stones is on stand-by to come in to the back four alongside Nicolas Otamendi.

Kyle Walker returns from a one-match suspension so he should resume his role at right-back while Benjamin Mendy should start at left-back meaning Danilo may drop to the bench.

Midfield: Fernandinho is almost certain to be deployed in the holding role once again with David Silva and Kevin De Bruyne deployed in front of the Brazilian midfielder.

Ilkay Gundogan could be back in the squad for the first time in ten months after recovering from a horror knee injury but a place on the bench is probably the best he can hope for after so long on the sidelines.

Attack: Sergio Aguero was left out of the starting eleven during the 2-1 win over Bournemouth before the international break but he could get a recall up front this weekend.

Gabriel Jesus may be the man to make way while Leroy Sane could come back in to the side in place of Raheem Sterling – who’ll serve a one-match ban against his former club following his controversial sending off against the Cherries.

Summer signing Bernardo Silva should keep his place alongside Sane and Aguero in attack against Liverpool on Saturday. 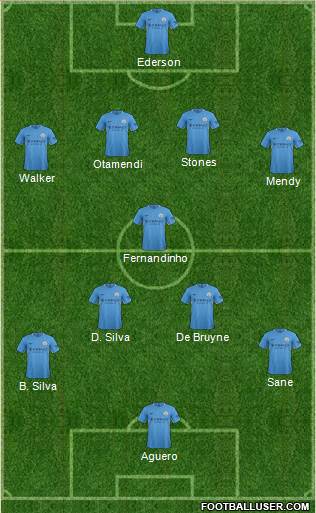 City head in to the weekend action sitting on seven points from their opening three games but they know they face a stern test against a dangerous Liverpool side. City are the narrow favourites to win the game but it’s a tough match to predict so check out That’s a Goal for top tips if you’re going to bet on the game. Guardiola’s side rarely lose on home soil so a Liverpool victory is unlikely but at odds of 3/1 many punters may be tempted to back Jurgen Klopp’s men this weekend.