Chelsea welcome Qarabag FK to Stamford Bridge on Tuesday night. Here is the side we think Antonio Conte will pick for the game:

Chelsea make their return to the group stages of the Champions League when they welcome Qarabag FK to Stamford Bridge on Tuesday night.

Goalkeeper: Thibaut Courtois could be given a breather so Willy Caballero is in-line to make a rare start between the sticks.

Defence: Conte is expected to make some changes to his side ahead of the visit of Arsenal on Sunday so Andreas Christensen could be given another chance to impress in defence.

Gary Cahill is available after serving his domestic ban so he could come in to partner Antonio Rudiger with David Luiz and Cesar Azpilicueta rested.

Midfield: Tiemoue Bakayoko could also be given a breather as he continues to work his way back to full fitness following a knee injury while Danny Drinkwater is a major doubt after picking up a calf injury.

Therefore, N’Golo Kante could continue alongside Cesc Fabregas in the middle of the park tomorrow night.

Davide Zappacosta is expected to be handed his full debut after completing his move to Stamford Bridge on deadline day so Victor Moses may drop out but Marcos Alonso should keep his place on the opposite flank.

Attack: Eden Hazard made his comeback from a broken foot with a late cameo off the bench during Saturday’s 2-1 win at Leicester but Conte has hinted he won’t rush the Belgian international back too quickly so he may have to make-do with a place among the subs again.

That would see Pedro keep his place in attack but Willian could get a recall while Michy Batshuayi is expected to come in up front in order to give Alvaro Morata a rest. 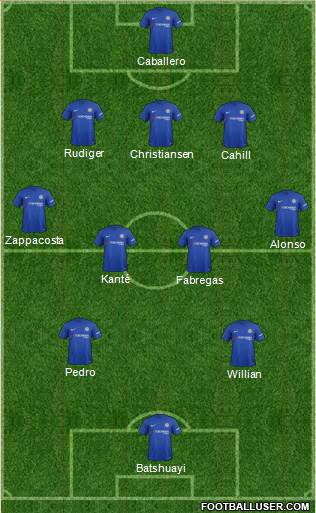