Tottenham Hotspur entertain Borussia Dortmund at Wembley on Wednesday night. Here is the side we think Mauricio Pochettino will select for the game:

Tottenham Hotspur will kick-off their Champions League group stage campaign when they entertain Borussia Dortmund at Wembley on Wednesday night.

Goalkeeper: Hugo Lloris is certain to continue between the sticks on Saturday unless he picks up a late injury.

Defence: Pochettino is expected to stick with a back three for the visit of the German giants tomorrow night which means summer signing Davinson Sanchez should keep his place in defence after impressing on his full debut at the weekend.

The Colombian international is set to play alongside Jan Vertonghen and Toby Alderweireld in the back three that performed superbly during the 3-0 win at Goodison Park on Saturday afternoon.

Midfield: Pochettino hinted at his press conference today that Serge Aurier could make his full debut for the club after completing a move from PSG late last month.

Kieran Trippier could therefore be given a rest after recently recovering from a knock but Ben Davies is expected to keep his place on the left in the absence of the injured Danny Rose.

Victor Wanyama continues to miss out with a knee injury so Eric Dier should keep his place in midfield while Moussa Dembele should get a recall with Moussa Sissoko dropping out.

Attack: Tottenham will be without one of their key men as Dele Alli starts a three-match European suspension following his dismissal against Gent in the Europa League last season.

Heung-min Son is the man most likely to come in to join Christian Eriksen in attack while Harry Kane is almost certain to lead the line up front despite the arrival of Fernando Llorente from Swansea on deadline day. 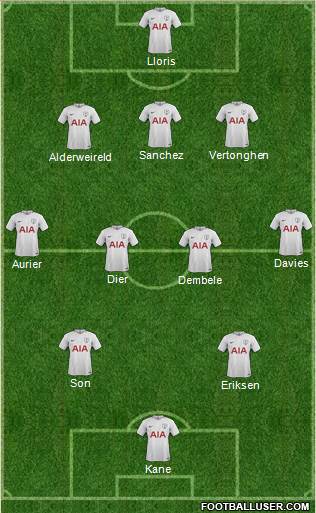