Liverpool return to the King Power to face Leicester City on Saturday. Here is the side I think Jurgen Klopp will select for the game:

Liverpool will look to bounce back from their League Cup disappointment when they return to the King Power to face Leicester City on Saturday.

Goalkeeper: Number three goalkeeper Danny Ward made his first start of the season during the League Cup defeat on Tuesday night but Simon Mignolet is set to return between the sticks this weekend.

Defence: Dejan Lovren is a major doubt as he’s still not been able to train due to a back injury that’s kept him out of the last two matches so Ragnar Klavan could keep his place at the back.

Joel Matip is a doubt after picking up a knock in midweek but Klopp will give the Cameroonian international every chance to prove his fitness. Joe Gomez will be on stand-by if Matip is ruled out.

Trent Alexnader-Arnold is in-line for a recall at right-back with Jon Flanagan making way while Alberto Moreno could come back in for Andrew Robertson at left-back.

Midfield: Jordan Henderson started in the League Cup clash but I can’t see Klopp leaving him out for this game so the skipper should keep his place with James Milner once again on the bench.

Emre Can is likely to shake-off a minor knock to return in midfield after training today with youngster Marko Grujic dropping out after making a rare start in midweek while Gini Wijnaldum should retain his place.

Attack: Alex Oxlade-Chamberlain could make way after a disappointing full debut in midweek with Mohamed Salah coming back in to the attack after being rested for the League Cup clash.

Sadio Mane remains suspended so Philippe Coutinho could be deployed out wide with Roberto Firmino returning up front in place of Dominic Solanke after the youngster made his full debut in midweek.

Daniel Sturridge is pushing for a recall but he may have to make-do with a place on the bench on Saturday afternoon. 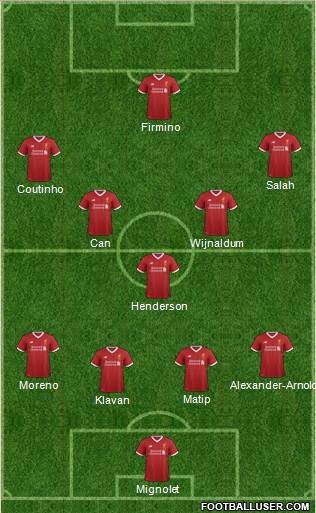