Liverpool take on Spartak Moscow in Russia on Tuesday night. Here is the side I think Jurgen Klopp will select for the game:

Liverpool will be looking to secure their first Champions League win of the campaign when they take on Spartak Moscow in Russia on Tuesday night.

Defence: Dejan Lovren made a successful return from a back injury to start against Leicester on Saturday so he should be fit to keep his place alongside Joel Matip on Tuesday night.

Joe Gomez is suspended after being sent off against Sevilla so Trent Alexnader-Arnold is in-line for a recall at right-back while Alberto Moreno could keep his place ahead of Andrew Robertson at left-back.

Midfield: Jordan Henderson should once again lead the side out while Emre Can is expected to retain his place in the middle of the park after another solid display last time out.

However, we could see Gini Wijnaldum given a rest with Philippe Coutinho moving in from the wing to a more central position. Adam Lallana remains out with a long-term thigh injury.

Attack: Sadio Mane is back in contention after serving a three-match domestic suspension so he should resume his position on the wing with Mohamed Salah keeping his place on the opposite flank.

Klopp may decide to give Roberto Firmino a breather with Daniel Sturridge starting up front but Alex Oxlade-Chamberlain is expected to make-do with a place on the bench once again. 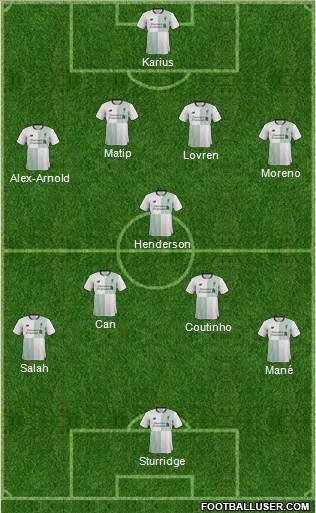