Tottenham take on APOEL in Cyprus on Tuesday night. Here is the side we think Mauricio Pochettino will select for the game:

Tottenham will look to make it two wins from two games in their Champions League group when they take on APOEL in Cyprus on Tuesday night.

Defence: Pochettino will be forced in to making a change at the back as Jan Vertonghen will serve a one-game suspension following his dismissal against Borussia Dortmund.

Juan Foyth is the man most likely to come in so the Argentinean youngster could start alongside Toby Alderweireld and Davinson Sanchez at the back.

Midfield: Serge Aurier will miss the Huddesfield game at the weekend due to suspension following his sending off during the win at West Ham on Saturday. It means the Ivorian is likely to play in Europe against APOEL with Kieran Trippier then coming in to play in the league at the weekend.

Ben Davies should retain his place on the left with Danny Rose still injured while Eric Dier is certain to start in the holding midfield role once again with Victor Wanyama still out with a knee injury.

Mousa Dembele is missing due to an ankle problem that kept him out of action at the weekend so Harry Winks could come in to the midfield tomorrow night.

Attack: Pochettino has selection problems in attack as Dele Alli serves the second of his three-match ban while Christian Eriksen hasn’t travelled to Cyprus due to illness.

Therefore, Heung-min Son is almost certain to start while we could see Moussa Sissoko move in to a more advanced role – although youngster Georges-Kevin Nkoudou is also an option.

Harry Kane continued his excellent start to the new season with another two goals on Saturday so it will be difficult for Pochettino to leave him out. Fernando Llorente will most likely have to make-do with a place on the bench once again. 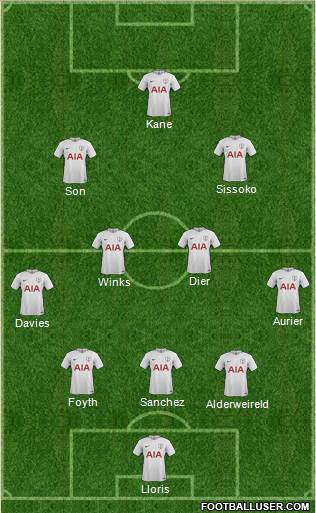