Arsenal take on BATE Borisov in Belarus on Thursday night. Here is the side Gooner Mac thinks Wenger will select for the game:

Arsenal will be looking to make it two wins from their two Europa League group games when they take on BATE Borisov in Belarus on Thursday night.

Goalkeeper: David Ospina is expected to continue as our goalkeeper in Europe so the Colombian international will return between the sticks with Petr Cech dropping out.

Defence: Wenger is expected to make changes to his defence with Per Mertesacker and Rob Holding recalled to the back three in place of the rested Laurent Koscielny and Nacho Monreal.

Calum Chambers is ruled out after picking up a hip injury during the Carabao Cup win over Doncaster so Shkodran Mustafi may be retained to play alongside Mertesacker and Holding.

Midfield: With a Premier League game against Brighton scheduled for 12pm on Sunday, the boss is expected to rest many of his key men with Sead Kolasinac certain to be left out after not training today.

Granit Xhaka, Hector Bellerin and Aaron Ramsey did take part in training this afternoon but I’d be surprised to see any of the trio start tomorrow night.

Reiss Nelson and Ainsley Maitland-Niles should get another chance to impress after starting in the League Cup last week while Jack Wilshere should come in alongside Mohamed Elneny in midfield.

Attack: Mesut Ozil and Alex Iwobi didn’t train today so they’re not expected to travel to Belarus for the game while Alexandre Lacazette is set for a breather ahead of the Brighton game.

Theo Walcott should get another start in attack and he’ll be looking to kick-start what’s been a disappointing campaign so far while Olivier Giroud is almost certain to lead the line up front.

With Iwobi and Ozil not expected to travel it will be interesting to see who Wenger goes with in the final attacking position and we could see Alexis Sanchez keep his place after starting in recent games against Cologne and Doncaster.

Youngsters like Willock, Nketiah and Dasilva will be hoping for places on the bench tomorrow night. 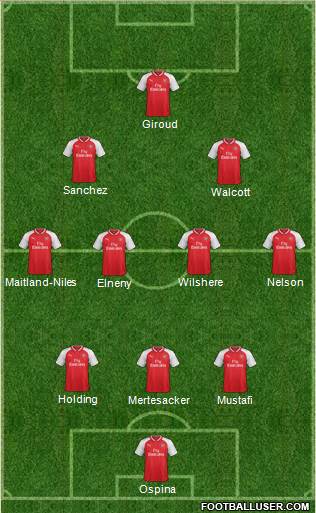