Liverpool take on Manchester United at Anfield on Saturday lunchtime. Here is the side I think Jurgen Klopp will select for the game:

Liverpool will look to get themselves back in the mix for the Premier League title when they take on Manchester United at Anfield on Saturday lunchtime.

Goalkeeper: Number one goalkeeper Simon Mignolet is expected to once again start between the sticks this weekend with Loris Karius having to make-do with a place among the substitutes.

Defence: With Nathaniel Clyne still sidelined with a hamstring injury Klopp will have to choose between Joe Gomez and Trent Alexander-Arnold for the right-back berth.

Gomez appears to be the front-runner these days so I expect he’ll keep his place in the back four alongside Dejan Lovren and Joel Matip while Alberto Moreno is back in favour at left-back so he should start ahead of Andrew Robertson.

Midfield: Adam Lallana has stepped up his recovery from a thigh injury but the United game comes too soon for the England international so he remains unavailable for selection.

Jordan Henderson should once again lead the side out while Gini Wijnaldum should keep his place in midfield but Emre Can could get a recall in the middle of the park after being left out for the 1-1 draw at Newcastle last time out.

Attack: Liverpool have been dealt a major injury blow with the news that Sadio Mane has been ruled out for around six weeks with a hamstring injury that he picked up during the international break.

It means Philippe Coutinho is set to be moved out to the left side of attack with Mohamed Salah keeping his place on the opposite flank and Alex Oxlade-Chamberlain having to make-do with a place on the bench.

Roberto Firmino is expected to get a recall up front after being left out of the 1-1 draw at Newcastle two weeks ago so Daniel Sturridge should drop out this weekend. 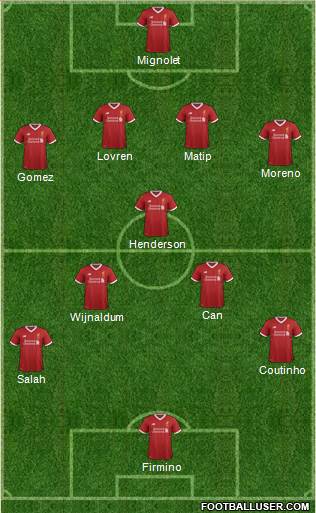