Chelsea take on Crystal Palace at Selhurst Park on Saturday afternoon. Here is the side we think Antonio Conte will pick for the game:

Chelsea will look to bounce back from their defeat to Manchester City when they take on Crystal Palace at Selhurst Park on Saturday afternoon.

Defence: David Luiz is back in contention after serving his three-game suspension so we should see the Brazilian international restored in the middle of defence with Andreas Christensen dropping out.

Conte may decide to give Gary Cahill a rest ahead of their Champions League showdown with AS Roma next week so Antonio Rudiger could line-up alongside Cesar Azpilicueta in defence.

Midfield: Chelsea have been hit by a major blow with the news that N’Golo Kante is facing weeks on the sidelines with a hamstring injury so Conte has a void to fill in midfield.

With Danny Drinkwater still not fully recovered from a niggling calf injury the Blues boss may opt to switch formation slightly with Cesc Fabregas lining-up alongside Tiemoue Bakayoko in a midfield two.

Attack: Alvaro Morata is set to miss out with a hamstring injury that he sustained while away with the Spain squad during the international break so the door is open for Michy Batshuayi to be given a chance up front.

Eden Hazard impressed for his country over the past two weeks so he’ll be looking to continue that form with Chelsea this weekend while Pedro is favourite to come back in to the attack ahead of Willian after both players were named on the bench against City last time out. 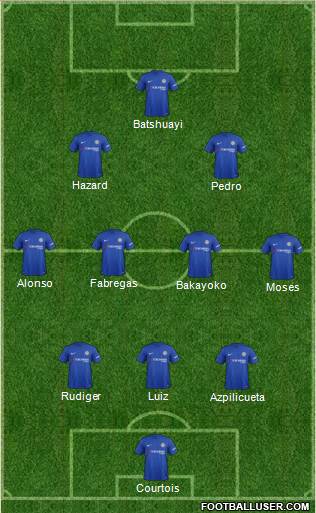