Arsenal take on Red Star Belgrade in Serbia this evening. Here is a preview with team news, line-ups, betting tips and predicted score

Arsenal will look to put one foot in the knockout stages of the Europa League when we take on Red Star Belgrade this evening.

We head in to the game off the back of a hugely disappointing 2-1 defeat at Watford in the Premier League so it’s important to bounce back with a positive result or we risk losing the momentum we built-up before the international break.

The Europa League has served as a nice distraction from domestic football so far this campaign as the ‘B team’ has entertained us en route to wins over Cologne and BATE.

If we can maintain that 100% record with another victory in Serbia today then we will move on to nine points in Group H and be on the verge of securing safe progress to the knockout stages of the competition.

However, Red Star Belgrade currently sit second on four points from their two games and we know the players will be in for an intimidating atmosphere at the Rajko Mitic Stadium so we shouldn’t be taking anything for granted.

Arsene Wenger is once again set to ring the changes with the boss resting the majority of our first team regulars ahead of Sunday’s Premier League trip to Everton.

Laurent Koscielny, Aaron Ramsey and Alexis Sanchez all trained yesterday but they aren’t expected to be involved while the likes of Granit Xhaka, Hector Bellerin, Sead Kolasinac, Mesut Ozil and Alexandre Lacazette will be rested.

Wenger has confirmed Mathieu Debuchy will be handed his first start in almost a year while youngsters Reiss Nelson, Ainsley Maitland-Niles and Joe Willock are also set to feature.

Theo Walcott and Olivier Giroud will come in to the attack while Jack Wilshere will get another start as he continues to work his way back to full fitness.

The big decision for Wenger is who partners Debuchy and Rob Holding in defence and Per Mertesacker could be given the nod at the back.

Petr Cech will keep his place in goal as David Ospina hasn’t travelled while Danny Welbeck and Shkodran Mustafi remain on the sidelines along with Santi Cazorla. 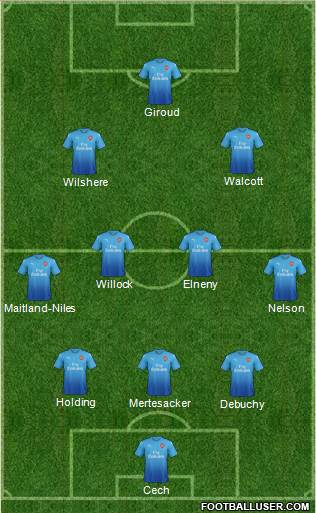 Red Star Belgrade 1-2 Arsenal: The hosts have lost just one of their last 11 European games and have won five of their last eight at home to English sides so this certainly isn’t going to be easy. A severely weakened side could find it tough in a hostile stadium but we can still field a side full of quality and potential. Wenger will be looking to Wilshere, Walcott and Giroud to lead us home and I’m backing the boys to secure a 2-1 win.

Arsenal are the 4/5 favourites to win this game with the bookmakers but we can get new customers enhanced odds of 25/1 on the Gunners – just click here to take advantage of these incredible odds [winning paid in free bets, max stake £1, T&C’s apply].