Manchester United take on Huddersfield at the Kirklees Stadium on Saturday afternoon. Here is the team I think Jose Mourinho will pick for the game:

Manchester United will be looking to keep the pressure on Manchester City with a win when they take on Huddersfield at the Kirklees Stadium on Saturday afternoon.

Goalkeeper: David De Gea is expected to once again start between the sticks as the Spaniard is probably one of the first names of Mourinho’s team sheet.

Defence: Eric Bailly will once again miss out as Mourinho doesn’t believe the centre-back will recover in time from the calf injury that he picked up while away on international duty with the Ivory Coast.

Phil Jones wasn’t deemed fit enough to start against Benfica last night but the United boss expects him to be available this weekend. Therefore, Jones is likely to replace Victor Lindelof alongside Chris Smalling at the back.

Daley Blind started at left-back last night but I think we’ll see Ashley Young or Matteo Darmian comes in against Huddersfield while Antonio Valencia should keep his place on the right.

Midfield: United still have problems in midfield as Marouane Fellaini remains out with a knee ligament injury while Paul Pogba is still working his way back to full fitness from a hamstring injury.

Michael Carrick is also not expected to recover in time to face Huddersfield so Ander Herrera is likely to keep his place alongside Nemanja Matic this weekend.

Attack: Marcus Rashford scored a fortuitous winner in the Champions League last night but Mourinho is expected to once again rotate him with Anthony Martial getting a recall on Saturday.

Henrikh Mkhitaryan wasn’t at his best against Benfica but the Armenian international should retain his place in attack while Juan Mata may also get another run out – although Jesse Lingard is an option if Mourinho wants to freshen things up.

With Zlatan Ibrahimovic still recovering from a knee ligament injury, United have limited options up front so there will be no rest for Romelu Lukaku who’ll be looking to get back among the goals. 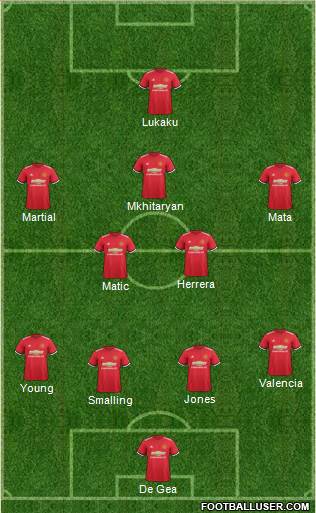