The transfer window may be closed but clubs are still working hard ahead of January and next summer so we’ll bring you all the latest gossip from around the globe. Today, Mesut Ozil wants to join Man Utd….

Arsenal super-star Mesut Ozil has told team-mates he will sign for Manchester United and a move could happen as early as January, according to the Mirror.

Ozil is in the final year of his contract at the Emirates Stadium and is no closer to signing a new deal with the Gunners refusing to meet his reported £350,000-a-week demands.

Arsenal chiefs had been prepared to pay the German international £275,000-a-week to sign a new deal but the Mirror claim the club are now less interested in keeping hold of the playmaker.

And it seems the feeling is mutual as the newspaper says Ozil has made no secret of his desire to leave Arsenal and has informed team-mates he is set for a controversial move to Old Trafford.

The 29-year-old has endured a poor season so far having failed to register a single goal or assist for the Gunners and his lack of enthusiasm is understood to be frustrating other players in the Arsenal dressing room.

A number of niggling injuries has meant Ozil hasn’t started a game since the 9th of September and it looks like he’s becoming increasingly out-of-favour under Arsene Wenger.

Ozil will be available on a free transfer at the end of the season but Wenger admitted last week that he may decide to cash-in on the attacker this winter and the Mirror claim Ozil is confident he will join United. 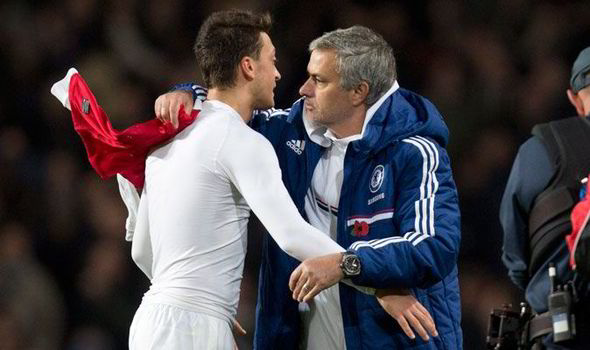 Jose Mourinho has admitted his admiration for the attacker several times in the past, describing him as the best No.10 in the world, and the pair enjoyed a successful spell together at Real Madrid.

Ozil has enjoyed mixed success since joining Arsenal from Madrid in 2013 but playing ahead of Paul Pogba and Nemanja Matic at Old Trafford could see him back to his best form if he does end up joining United.

It would certainly be a controversial move and I’m sure it wouldn’t go down too well in north London but I wouldn’t be surprised to see Ozil end up being reunited with Mourinho next summer.