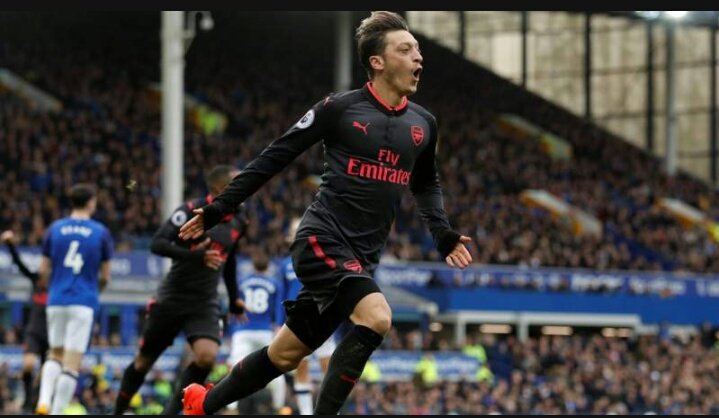 Mesut Ozil was among the goals as Arsenal came from behind to beat Everton 5-2 at Goodison Park this afternoon and move level on points with Chelsea in the table.

Arsenal started superbly and could have been out of sight inside the opening ten minutes with Jordan Pickford making a number of saves to keep the scores level.

As seems to be the way, Everton were the ones to break the deadlock as Wayne Rooney curled home a superb effort from the edge of the box in the 13th minute after Granit Xhaka was dispossessed.

We continued to create chances and eventually levelled things up five minutes before half time as Nacho Monreal fired home a well-taken volley on the rebound after Granit Xhaka’s shot was saved by Pickford.

It was 2-1 in the 53rd minute as Mesut Ozil finished off a flowing counter-attack with the German international heading home from an Alexis Sanchez cross.

Everton’s chances of finding an equaliser were dented when Idrissa Gueye was sent off in the 68th minute and Arsenal extended their advantage minutes later when Lacazette swept home after being teed-up by Ozil.

Aaron Ramsey made it 4-1 with a neat finish before an error from Petr Cech gifted Niasse a tap-in for 4-2. Sanchez then completed the scoring with a last gasp strike to seal a 5-2 win which moves Arsenal level on points with fourth-placed Chelsea.

Watch highlights and the goals here: