Arsenal take on Norwich City at the Emirates on Wednesday evening. Here is the side Gooner Mac thinks Arsene Wenger will select for the game:

Arsenal will look to book their place in the next round of the League Cup when they take on Norwich City at the Emirates on Wednesday evening.

Goalkeeper: The boss has a big decision to make in goal as David Ospina has been ruled out with a groin injury. Petr Cech played in the Europa League win over Red Star Belgrade last week which suggests he’s not ready to throw youngster Matt Macey in to first team action just yet. Therefore, Cech could keep his place tomorrow. Let’s just hope he doesn’t get injured.

Defence: Otherwise, Wenger is set to make wholesale changes to his team with a similar side to the one that beat Belgrade last Thursday expected to be selected.

Laurent Koscielny should be rested as we need to protect his Achilles while Nacho Monreal has become a vital player for us this season. With Shkodran Mustafi and Calum Chambers still injured, we can’t really take any risks with Per Mertesacker either.

Therefore, we could see Mohamed Elneny getting another run-out in defence while Mathieu Debuchy could make his second appearance of the season after starting in Europe last week. Rob Holding is certain to come in to the back three.

Midfield: Jack Wilshere is expected to get another chance to impress in midfield and he’ll be looking to build on another excellent performance against Belgrade. He played further forward in Europe but I think he’ll be back in centre-midfield tomorrow night.

Sead Kolasinac and Hector Bellerin should get a breather with youngsters Reiss Nelson and Ainsley Maitland-Niles given another start in the wing-back positions while Francis Coquelin should come in with Granit Xhaka and Aaron Ramsey rested.

Attack: We finally got our first glimpse of Alexis Sanchez, Mesut Ozil and Alexandre Lacazette playing together in attack and they didn’t disappoint during our 5-2 win at Everton yesterday.

No doubt the trio will all be rested against Norwich so Olivier Giroud should come in to lead the line up front with Theo Walcott also given another start in attack.

With Danny Welbeck out injured, we should see Alex Iwobi coming back in to the side after not featuring against Everton at the weekend. 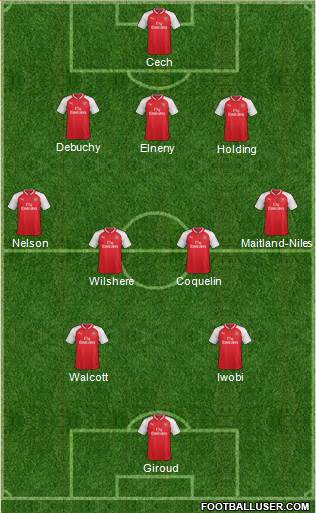