Manchester United take on Swansea at the Liberty Stadium on Tuesday night. Here is the team I think Jose Mourinho will pick for the game:

Manchester United will be looking to book their place in the fifth round of the League Cup when they take on Swansea at the Liberty Stadium on Tuesday night.

Goalkeeper: David De Gea is expected to be given a rest with Sergio Romero coming in between the sticks having started against Burton in the previous round.

Defence: Eric Bailly is close to making his comeback from a calf injury but this game may come too soon so Chris Smalling could keep his place in the back four.

Phil Jones is set to be ruled out after picking up an injury during the early stages of Saturday’s 2-1 defeat at Huddersfield Town. Eric Lindelof  replaced Jones during that game and he should start tomorrow – although he’ll be looking to make amends after his mistake led to their second goal.

Antonio Valencia is expected to be given a rest which could see Matteo Darmian recalled at right-back while Luke Shaw could make a rare appearance on the left. Daley Blind is another option for Mourinho if he doesn’t think Shaw is ready to start.

Midfield: United have limited options in midfield as Paul Pogba and Marouane Fellaini are still working their way back to fitness from injuries while this game is also likely to come too soon for Michael Carrick.

Nemanja Matic has been excellent for United since joining the club in the summer but he needs a rest so Ander Herrera may line-up alongside youngster Scott McTominay tomorrow night.

Attack: Marcus Rashford is almost certain to get a recall after being named on the bench at the weekend and I think we could see him deployed through the middle with Romelu Lukaku given a well earned rest.

Henrikh Mkhitaryan didn’t start against Huddersfield so the Armenian international should come back in to the side while Jesse Lingard could keep his place in attack.

Juan Mata may be given a breather but Anthony Martial could keep his place despite being substituted at half-time during the defeat at Huddersfield. 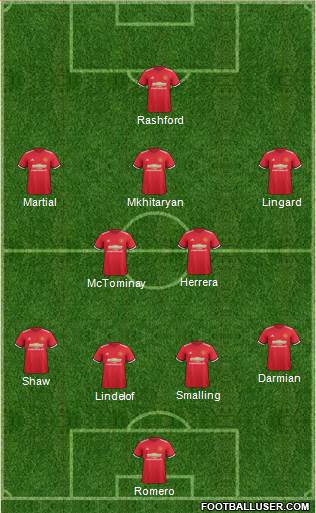