The transfer window may be closed but clubs are still working hard ahead of January and next summer so we’ll bring you all the latest gossip from around the globe. Today, Arsenal are linked with Berkay Ozcan… 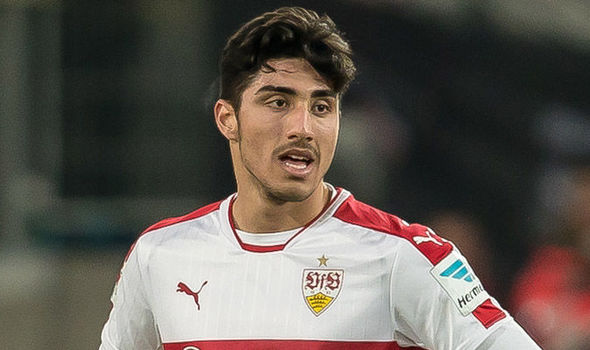 Stuttgart midfielder Berkay Ozcan has revealed that he and his agent are in talks with Arsenal over a potential move to the Emirates, according to the Express.

Ozcan progressed through the Stuttgart youth set-up to become one of the most highly-rated youngsters in Germany football since breaking in to the first team set-up last year.

The 19-year-old has made 26 appearances so far – scoring 3 goals and setting up a further 4 in the process – and he’s been tipped to become a regular in Hannes Wolf’s starting eleven over the coming years.

It seems Ozcan’s potential has caught the eye of Arsene Wenger’s scouts as the midfielder has claimed that he’s in talks with Arsenal about a potential move to north London after we scouted him over the past two years.

The level-headed teenager has suggested that it might be too soon for him to join a club like Arsenal so he may opt to continue his development with Stuttgart for the time being.

However, Ozcan does say that he wants to join Arsenal at some point in the future once he feels he’s in a position to challenge for a first team place.

Ozcan is quoted as telling beIN Turkey via the Express:

“My agent and I are in talks with Arsenal. Arsenal have been scouting me for the past two years and send representatives to watch my games.

“I am not sure if now is the right time to join Arsenal, it may be a bit early for me. I want to prove myself here and keep developing first.

“Ultimately, Arsenal is the club I want to join in the future, god willing I will achieve my goal.”

We’ll have to wait and see how things develop over the coming months but an opportunity to join Arsenal doesn’t come around too often so if Ozcan really has dreams to play for us, then he may want to take his chance while it’s on the table.

It is admirable that he wants to continue his development with the Stuttgart first team rather than play for the Arsenal U23’s but we might not renew our interest in the Turkish U21 international in the future, so he’d be mad to turn down this opportunity.