The draw for the quarter finals of the Carabao Cup has been conducted this afternoon and all the big-guns have been kept apart.

The draw for the quarter finals of the Carabao Cup has been conducted this evening and all the big-guns have been kept apart.

Manchester United booked their place in the last eight thanks to a Jesse Lingard double which secured a relatively comfortable 2-0 victory over Swansea City on Tuesday night.

Jose Mourinho’s side will now face a trip to Bristol City after they reached the quarter finals with an impressive 4-1 demolition of Crystal Palace.

Arsenal were given a scare as they needed a brace from teenage substitute Eddie Nketiah to beat Norwich City 2-1 in extra-time at the Emirates Stadium on Tuesday night.

The Gunners have been drawn to face London rivals West Ham at the Emirates after they came from two-down to beat Tottenham 3-2 at Wembley.

A late Willian goal proved crucial as Chelsea edged past Everton 2-1 at Stamford Bridge last night to book their place in the quarter finals and the Blues will now entertain Bournemouth after they beat Middlesbrough 3-1.

Manchester City were pushed all the way by Wolverhapton Wanderers as the Championship side took the Premier League leaders all the way to penalties before Claudio Bravo’s heroics saved Pep Guardiola’s blushes.

City will now face a tricky away trip to 2015/16 Premier League winners Leicester City after they booked their place in the draw with a 3-1 win over Leeds United.

So all the four big boys have ‘coincidentally’ been kept apart meaning we could have some mouth-watering semi-finals to look forward to if they all progress from the quarters.

The ties will take place the week commencing 18th December. 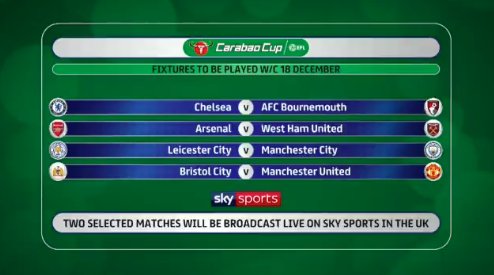